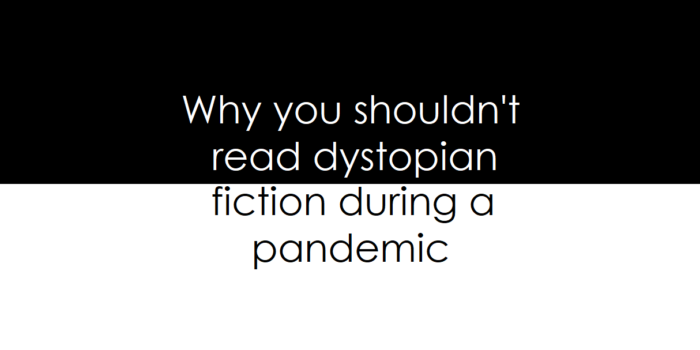 When I started this blog in 2012, I was a little lost. I had just finished studying literature at university, was unemployed and had no idea what I wanted to do for a career. I was recovering from what could possibly be described as a mental breakdown, and I had just embarked on an intense relationship with my now civil partner – mere weeks before moving to Iceland for three months.

I began Dystopic because I had read a lot of dystopian fiction for my dissertation at university, and my fascination for this bleak genre bled into my reading habits for years afterwards. Reading and writing about oppression, corruption and dictatorships was an oddly soothing addition to my then directionless life. Maybe there was something about the rigid structure that the characters had to endure that felt comforting? Maybe immersing myself in a society much worse than my own gave me a sense of perspective? Perhaps the hope that so many courageous rebels clung on to in the stories I read gave me the strength I lacked?

For me, the novels I read at the time, such as Nineteen Eighty-Four and The Handmaid’s Tale, were all connected by the same theme: change. I didn’t focus on the misery the characters had to endure so much as I was captivated by the future they hoped to fight for.

Fast forward to today, and I’d say I’m happier than I’ve ever been. And rather surprisingly, I’d also say I’m definitely not in the right mindset to read dystopian literature.

Like everyone, the pandemic has shrunk my world down to the four walls I live in. I’ve had moments of fear, anxiety, frustration and panic, and I can categorically state that 2020 was the worst year of my life due to the many awful things that happened in those short yet long twelve months. However, I was happy with everything I had despite all of that.

It feels like the complete opposite of 2012. The outside world was fine (ish) back then, but it was my place within it that wasn’t right. Now I’m older and settled, the world around me has gone batshit crazy, but unlike Winston I have no Big Brother to rebel against. To go against government guidelines right now could put lives at risk, but they’re not at risk at the hands of the government itself *. I have lived a claustrophobic nightmare with nothing about it to fight against, nothing to work at, no truth to seek.

Works of dystopian literature are not usually born during dystopian situations – they are created upon reflection of them. Nineteen Eighty-Four was published four years after World War Two ended. The Handmaid’s Tale was published thirteen years after abortions were made legal in the USA. For me, while COVID-19 is still rampant in the world, this is not the right time to read about what-ifs and could-bes. I want escapism. I think that’s why I’m not able to enjoy dystopian literature right now.

Oddly, my genre of choice has become horror. An axe-wielding maniac I can deal with, but societal strain is a no from me **.

So Dystopic will be a little different for a while. What that means exactly, I’m not sure yet. But don’t worry – I’m still a fan of miserable literature, I’ll just feature more creepy ghouls than corrupt governments.

** I am in no way suggesting that I can physically deal with an axe-wielding maniac, but right now I can mentally cope with the concept of one. Let’s be real here, I am a pale and flabby geek, I am not physically able to deal with much other than Word documents and Spotify playlists.