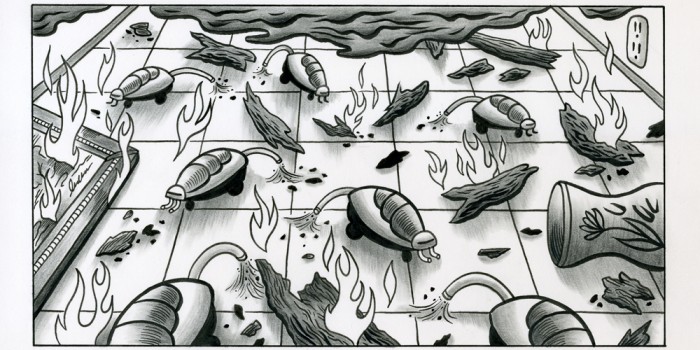 There Will Come Soft Rains by Ray Bradbury

I know I’m in safe hands when I read a Ray Bradbury short story, but even if I was unaware of his work I would be immediately assured by the stunning title There Will Come Soft Rains.

And it is very, very good. The story is set in the year 2026 in a sophisticated, self-sustaining house surrounded by a barren wasteland of rubble. The family that had occupied the home must have died a long time before in some sort of nuclear war, as is hinted at via the ruined landscape, but the house is ignorant to the fact. It continues to make breakfast, wash the dishes, vacuum, dust and water the lawn. It calls out for the family, offering assistance and requesting for their preferences on trivial everyday matters, but the only response received is silence.

After a time of this pointless routine, a nearby tree falls and crashes through a window in the kitchen causing an aggressive fire to spread throughout the rooms of the house. As the place burns, the house robots go into overdrive trying to put out the fire and clean up the ash but it is of no use, and in an oddly disturbing scene the robots maniacally carry out their duties until they are completely consumed by the fire.

The story is a superb example of the most common themes in 1950s science fiction: constant fear of nuclear war, emphasis on the destructive side of the American dream and the alien concept of the perfect family unit. On the surface of it Bradbury is only describing an empty, gadget-driven house destroyed by fire, but so much is said on the ridiculousness of normality in times of conflict within these beautiful words. The house cannot see the death and danger that surrounds it, and neither could the inhabitants of 1950s suburbia as they had striven for normality and security by placing importance on domesticity over the real political problems of the time.

Bradbury is giving a very timeless statement in this story: ignorance and blindness cannot protect anyone from the truth. Even if attempts are made to shield oneself from the harshness of reality, there can be no immunity to it. This message is incredibly relevant to today as we shield ourselves from life by using our technology as a barrier, but this will not last for long. We are only delaying the inevitable.