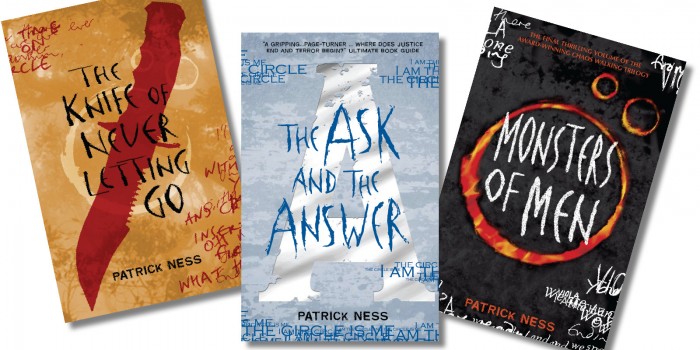 The Knife of Never Letting Go by Patrick Ness

Well, gosh darn it, this is rather exciting.

The Knife of Letting Go is the first book in the trilogy and it follows a young, slightly odd pre-teen named Todd Hewitt who is growing up in New World. New World was the planet that settlers from Earth discovered while fleeing an uncomfortable state of overcrowding and general unpleasantness back home. Just as they began to settle in to their new surroundings, native aliens began war with the humans and bombed them with a chemical that killed off the women outright and biologically altered the men so that they were able to hear each other’s thoughts, or each other’s ‘Noise’ as they christened it. The men were also able to hear the Noise of all the animals that they cohabited with on the planet, no matter how big or small the creature. The aliens were eventually defeated but the men soon realised that the Noise made it impossible for them to contain any private thought or feeling, and thus began a joyless existence for the survivors.

Todd was born into this less than ideal way of life in a settlement called Prentisstown with his dog Manchee, an excitable and slightly moronic hound who often declares when he is in need of a poo (much to my amusement). You will be immediately reminded of Dug from the film Up whenever Manchee is featured in the story, but this is by no means a bad thing as he is a delightful and much needed comic relief.

Todd is approaching his thirteenth year on New World, the age of manhood, and the birthday boy has been told to expect a ceremony during which secret knowledge will be imparted unto him that only adult men are permitted to know. The orphaned boy is the youngest in Prentisstown and is desperate to grow up in order to discover what it means to finally become an adult, although his guardians Cillian and Ben are filled with badly concealed trepidation. As the big day approaches emotions begin to rise throughout the town and its inhabitants’ Noise begin to reveal horrifying things that Todd doesn’t completely understand. He is urged by his guardians to flee Prentisstown but Todd has no idea where he is going, what Cillian and Ben are trying to protect him from or if there is anything beyond the town to actually flee to; all he knows is that, before he turns thirteen, he must run away from all that he knows and never turn back.

The Knife of Never Letting Go is one of the most exciting and intriguing YA books I have read in a very long time. It broaches sensitive subjects surrounding the difficulties of growing up as Todd is forced to make such heart-breaking decisions that it’s hard to believe the novel was written with teenagers in mind. The book is a hell of a lot more devastating and unpredictable than I expected it to be, mostly due to the fact that it keeps cliches and literary conventions at arm’s length.

The fact that Todd has no secrets from the people that surround him due to his Noise is an ingenious addition to this adventure story. Ness illustrates the idea that privacy is just as much a form of communication as information is, and that knowledge, influence and mental stamina are attributes far more powerful than physical intimidation. Ness clearly had social networking sites in mind when writing this for teenagers, but the novel’s themes tackle issues well beyond the evils of Facebook and Twitter.

Because the character of Todd has supposedly not had much in the way of a formal education, a lot of the vocabulary used in the novel is purposefully misspelled. I would like to say that I got used to this and it became endearing, but it continued to jar with me throughout.

Another element that jarred was the cartoonish evilness of the villains. The villains were almost like soulless killing machines, Ness using the concept of insanity as a drive for their unethical desires. There was a great deal of strength in a few of the main characters, but the ‘bad guys’ and even some of the parental figures were fairly two dimensional and unbelievable.

The tension in the novel was well written with fantastic pacing, but unfortunately I was fairly disappointed with how things concluded. The reasons Todd was told to run from Prentisstown in the first place and the explanations as to why the people of his town were desperate to get him back were overall tenuous and weak, but the more minor details of the plot were well-rounded and satisfactory. I wanted there to be so much more depth to the story than there was, but like a lot of fiction of this nature the set up seemed more carefully written than the revelation. I’m hoping, since there are two more novels in the series, that more questions are posed and answered as the plot becomes more substantial.

Aside from a few grumblings here and there, this novel is really impressive and I found it extremely easy to devour.

One thought on “The Knife of Never Letting Go Review”