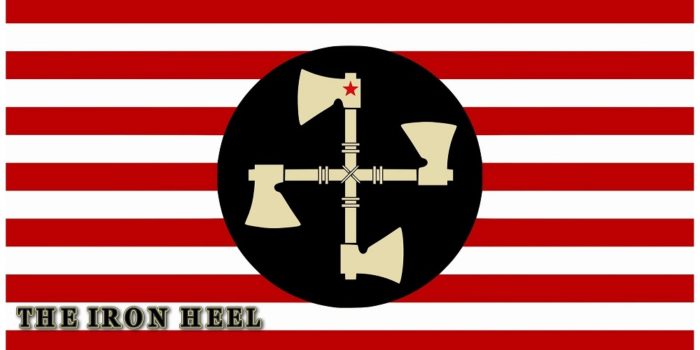 The Iron Heel by Jack London

The final novel from my 2017 Reading Challenge is Jack London’s Iron Heel – and it was a bit of a heavy one to say the least.

The novel takes the form of a fictional historic manuscript written by Avis Everhard, a privileged upper-class woman from the early 1900s, with footnotes written by scholar Anthony Meridith in 2600. Avis Everhard’s manuscript focuses on her husband, Ernest, an intelligent working-class man who is determined to fight against the oppressors of his class. Avis claims Ernest to be the instigator of the revolution (although believing him to have had an integral part in it, Meredith determines Ernest to be a cog in the wheel on the path to revolution rather than the leader of the entire movement – a detail I loved).

The manuscript recalls the events leading up to the Oligarchy (Iron Heel) and how it was dismantled by the Brotherhood of Man through the First Revolt and the beginnings of the Second Revolt. London foresees capitalism being overtaken by socialism, which makes way for a fairer and healthier society.

It’s hard to believe this novel was written in 1908. Although politically dense and with historic references I often had to research, it’s an incredibly accessible read – an intention of London’s, I’m sure. Novels of this kind are never particularly focussed on character and are incredibly plot heavy, but I found myself fascinated by London’s predictions of the future – even though he turned out to be so very, very wrong.

That being said, I found it occasionally frustrating that The Iron Heel read as more of a manifesto than a novel. Although the premise of this dystopian society is entirely imagined, I often felt London’s musings would have been better suited to an essay. I didn’t get a feeling of satisfaction from character development, nor did I feel I gained any useful information as I would with non-fiction. It was an odd mix.

Although not entirely relevant in today’s world, The Iron Heel is undoubtedly an important work of fiction. It’s easy to see how it shaped dystopian fiction of the 50s and 60s, particularly Orwell’s 1984, but I must say I found Zamyatin’s We to be a far more compelling story.