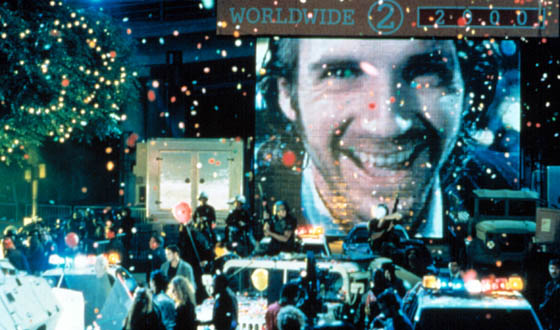 In an alternate cyberpunk version of 1999, SQUID is the order of the day (that’s Superconducting Quantum Interference Device, not the tentacled sea creature). Fiennes stars as Lenny, an ex-cop who peddles virtual life experiences to those who don’t want to have to leave their living room to enjoy the world.

The SQUID device records whatever its wearer experiences and saves all the information from their cerebral cortex onto a disc. When another person places the disc into their own SQUID machine, they can then feel, see and think exactly like the person who had recorded it. The consumers of these experiences can enjoy the thrill of a robbery, the pleasure of a sexual encounter with someone way out of their league…or even experience what it’s like to be a different gender.

But Lenny anonymously receives a SQUID disc that is not so entertaining; a ‘blackjack’ or snuff film of his friend Iris being murdered. She was running from something, either from the violent cops that parade the riotous city of Los Angeles or the shady gang members that also defile the streets. Either way, just before her death Iris was frantic, and mentioned that Lenny’s ex girlfriend, Faith (Lewis) was also in deep trouble. As he is still in love with her Lenny races to Faith’s aid and to demand to know what she’s involved in, only to be stopped by her dodgy music producer boyfriend, Philo (Michael Wincott). Lenny is therefore forced to solve the mystery of Iris’ murder with his friends Mace and Max (Bassett and Sizemore) in order to save the love of his life from meeting the same fate as his friend.

Amidst the main sci-fi crime thriller storyline, the film is also deeply saturated in racial politics, themes of dystopia, the negative aspects of consumerism and the inevitable downward trajectory of human kind. It also focuses on the idea that technology could envelop our real life experiences and replace them with digital ones…and I don’t think I need to point out the examples of this in our everyday lives to demonstrate how poignant the movie is.

There are many POV shots in this film but surprisingly I didn’t feel motion sickness once, unlike when I view some of the recent ‘found footage’ style movies that have become popular in the last five or so years. The camera work was exceptional, smoothly executed and seamless.

What I really loved about Strange Days was that the tone was occasionally playful rather than continuously bleak – there were an array of one-liners placed here and there to relieve the tension at points. Fiennes’ proved charming and funny, warming the other characters up sufficiently enough to make them seem somewhat likable too.

Although there were points where I pre-empted the plot twists, the film was generally enthralling and felt refreshing for a twelve-year-old film – even if it was a little typical of the 90s. The ending was slightly overworked but that can be forgiven when you note the huge amount of themes and ideas that were compacted into 145 minutes.

Overall, as a fan of sci-fi I thoroughly enjoyed this film and don’t believe it deserved the flop it endured at the 1995 box office. Okay, so there were odds and ends that could’ve been ironed out a little, but the whole thing was nothing but incredibly ambitious and you have to respect it for that. This is one of those times when I have to favour the critics over the public, and I sure do hate them being proved right all the time.

So, if you enjoy devastatingly close to the bone but quirky dystopian movies, then you’re in for a treat. A definite recommendation. Also, OMFGZ VOLDERMORT PLAYS A GOOD GUY!! – (apologies, it is unfortunate that due to my youthful age, Fiennes will forever be seen as He Who Must Not Be Named to me).