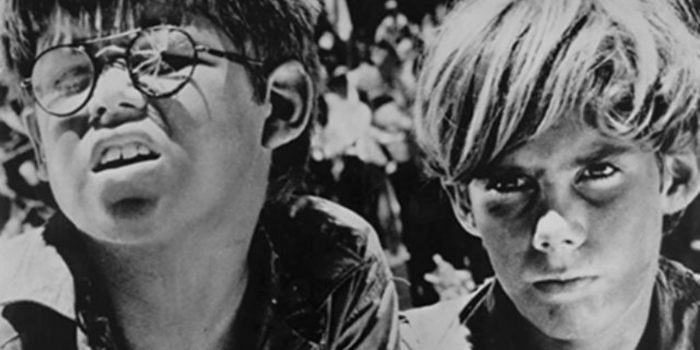 This blog post is part of my 2018 challenge ‘moving forward by going back’. Lord of the Flies by William Golding

Although I try not to be, I am a fairly negative person, and I do tend to see the downside of most situations. That being said, I genuinely believe reading ‘dark’ fiction makes me feel more hopeful. I suppose if you delve into the grimmest depths of humanity, the only thing left to do is turn around and face the light.

Sorry. Even if I try to make an uplifting comment it ends up sounding dramatically morose.

When I first read Lord of the Flies at the age of twenty, I felt nauseous from the unrelenting onslaught of human cruelty I faced in a mere sixty thousand words. There was so much unfairness, so much innocence lost, so much poorly timed naivety. It was almost too much to handle, and to deal with the pain I ended up basing my dissertation on it.

After reading and dissecting the same novel for six months, it probably comes as no surprise that I didn’t pick it up again until almost a decade later. I have the same copy I used at university – an old 1973 edition that my dad never returned to his secondary school library – and just from holding the faded, browned pages in my hands, I felt that same sense of dread in the pit of my stomach that I did after ingesting Piggy’s death for the first time. I felt so uneasy I almost stopped myself from revisiting the story, but it also felt important to read it again.

It took longer than it should have done to finish it. I flinched at each page, knowing exactly what was going to come next. Once I had finished it I vowed never to read it again – not because it’s not as good as I remember (it’s probably better), but because I could never go through that experience willingly again.

The impact of the book was still as harsh as it was before, but in a very different way. I have a nephew and friends with small children, so the idea of young boys being left to fend for themselves pained me enough without the horrific displays of cruelty that followed.

What surprised me most was how exasperated I felt toward the brutality and injustice of the boys’ hierarchy. Before I had felt shocked and a little doubtful that this would happen in a community of young people, but it saddens me now to realise my own naivety cushioned me from the real harsh blows of the book. People are people. We find different ways to torture one another, but we still do it.

Okay, this is getting a bit too sad. Even for me.

Like I said before, gloomy books do make me feel more hopeful. The boys in the book are not at all like children of today – they had limited access to different cultures, were focused on an old-fashioned view of masculinity and had been brought up with a very restricted view of what they could be and what they could achieve. Of course, I’m in no way saying that the kids of today can’t be cruel to one another, but there has been clear progress in the way we raise future generations. We are more accepting, even if the media tries to persuade us otherwise, and we are more empowered to think as individuals.

Still, I must admit, Lord of the Flies has taken its toll on me. But maybe that’s a good thing? My capacity for bleakness is shrinking, so either I’m getting old and fragile or I’m more positive than I’ve ever been.

Well, since I just finished a novel about euthanasia, it looks like I’m just old.