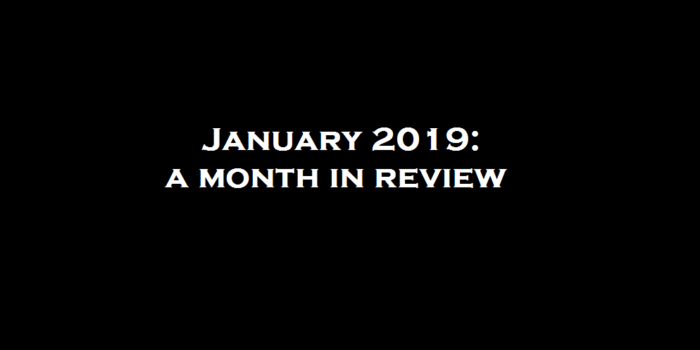 Here’s a quick look at the books, movies, TV and music I’ve ingested this month:

The Wife by Meg Wolitzer

The Wife is an intense story of a jealous wife’s bitter feelings toward her famous writer husband and her decision to leave him – mere hours before he accepts a prestigious literary award in Helsinki.

Joan once had literary ambitions of her own, but she was denied the life her talents could have provided her with. Were her dreams of becoming a writer quashed because of her imperious husband, Joe? Was it her gender? Was it societal pressures? Or perhaps her comfortable upbringing diluted her hunger for success? Joan deliberates all of these issues throughout the novel as she recalls her life with Joe leading up to the Helsinki award.

The Wife was an incredibly painful read at times, especially as an ambitious female writer in a relationship with an equally ambitious male writer, and I sympathised with Joan – but I also felt maddened by her. Her accusations were both spot on and misplaced, highlighting the complexities and contradictions surrounding gender inequality. Was she a victim? Or did she sabotage herself? Even days after finishing the book I find myself questioning it all.

I’ll definitely be reading more of Wolitzer’s bibliography in the future. Her writing style is eloquent, beautiful and powerful, and I don’t think I’ve read a book so fast in years.

I didn’t want to watch You, but curiosity got the better of me. I almost turned it off during the embarrassingly banal monologue in the opening scene, but like all well put together trash I blinked and had somehow watched the whole thing in just a few days.

I found You to be problematic, but not in the way some other viewers did. Although I despise the glamorisation of murder and the way the show depicted the victim of the story as the villain, I was more put off by You’s desperation to cover all bases.

It wanted to be Dexter. It wanted to be a romantic comedy. It wanted to be a thriller, a mystery, a suspenseful psychological drama with poignant insights into modern relationships – and then it had to desperately scrabble together as many tenuous twists as possible while simultaneously over-explaining everything. Then again, the show must have done something right, because it stole my attention and I’ve been grumbling about it to everyone I know ever since.

My boyfriend is a huge David Lynch fan and has been wanting to introduce me to his work for many years now. I suggested watching Blue Velvet together the other night after a seven-year long build up and, although I do appreciate the movie (as horrendously patronising as that is to write) I didn’t particularly enjoy it. That won’t surprise my boyfriend as he did warn me I might feel that way, but I reckon I’m now profoundly disappointing to him.

There was a creepiness to the movie that I thought was brilliant, it was visually unique, the dialogue was bizarre and ethereal and overall it was like nothing I’d ever seen before. But I suppose I just don’t get it. I’ve been told that’s the way with Lynch – you either ‘get’ him or you don’t. And I happen to be one of those unsophisticated morons with poor taste who doesn’t feel any sort of connection to his work.

So I don’t get Lynch, but I’ll happily sit through an entire series of You. If you want to stop reading this blog, I understand.

The Twilight Sad have been teaching me how to sing in Scottish since 2008. They are somehow petrifyingly aggressive yet sweet and gentle, all projected in a complex mesh of noise that truly swallows you whole. Then again, they also perform painfully beautiful acoustic renditions of their songs with fragile lyrics that have made me tear up on many occasion.

Although they have never really had the accolade they truly deserve, I think their latest album will change things for them. There’s so much going on with IT WON/T BE LIKE THIS ALL THE TIME and I can’t even begin to describe the emotional rollercoaster I’ve been through since its release.

I’ve introduced a few people I know to The Twilight Sad and they’re always quick to suggest bands that may have influenced them, but after a few listens this need to compartmentalise them goes away. There’s nothing else like them at the moment, and I can’t wait to see them live at the end of this month.

Also, check out their album artwork over the years – they’re all stunning and I’m desperate to get a tattoo in a similar style.