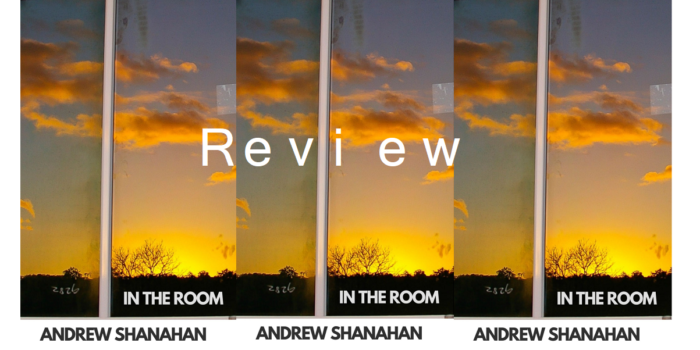 In the Room by Andrew Shanahan

March 2020 was an incredibly shit month for most people – actually, I can’t imagine many will look back at that time particularly fondly – but there is one great memory I have of the beginning of the end of days, and that is reading Andrew Shanahan’s Before and After.

It was everything I could have possibly wanted from a novel at that time. It was apocalyptic enough to feel relevant, but joyful enough to distract me from those first few weeks of lockdown (and I subsequently wrote a review of it, which you can find here).

So when I saw Shanahan was releasing a short story this July, I immediately clicked ‘buy’. I mean, with a synopsis like this, how could I not:

The story follows Ted Reece, a man who I presume is neurodivergent, who is using wheelchair while he awaits surgery on his knee. Confused birds often fly into the windows of the apartment building, and Ted helps them by releasing the surviving ones and burying the dead ones in the garden with Mrs Liu, his upstairs neighbour. He also has an downstairs neighbour, Arge, who is an aggressive arsehole (but has a lovely German Shepherd dog, named Robert, who also thinks his owner is an arsehole).

One day something larger than a bird crashes into Ted’s apartment building. Something almost unbelievable, and it breaks his window. What ensues is Ted’s attempt to rectify the situation, enlisting the help of Mrs Liu, all while trying not to enrage the raging Arge.

I loved In the Room. Much like Before and After there was an infinite amount of warmth and sweetness to the story, especially with the character of Ted. His heart is most certainly in the right place, even though he is a little forgetful and often makes mistakes, which can be a little frustrating for those around him (I think making Mrs Liu a drink with Bisto granules because he didn’t have any coffee was a highlight for me, especially as he thought she wouldn’t notice).

I also loved Shanahan’s ability to make such an inconsiderate, mean and unlikeable character as Arge. He is cartoonishly despicable, yet somehow simultaneously identifiable. I thought of at least three people that I’ve met in real life who are unfortunately comparable to him.

Ultimately, this is a story of compassion and kindness, with a delightfully high level of whimsy and downright absurdity. If you’re feeling down about humanity, or simply need an escape from the day-to-day, then give In the Room a read. I guarantee you’ll be smiling by the end. You may also be a little befuddled, but you’ll definitely be smiling.