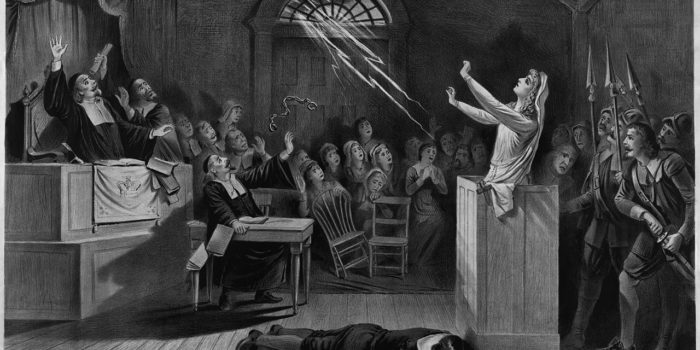 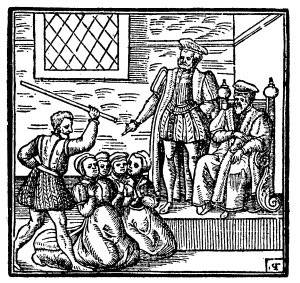 For this year’s #HalloweenMonth I’ve decided to look into true crimes involving witchcraft. One of the most famous cases in English history was the Pendle witch trial, which took place in Lancashire in 1612.

Jennet Device was a nine-year-old girl living with her mother, half-sister and half-brother in her grandmother’s house, Malkin Tower (dubbed ‘shit towers’ by the locals because it was a such a poor, squalid place to live). As the youngest member of the family and the only bastard child, Jennet must have had a very rough start to life – it’s likely she was abused by her family as well as members of the local community

There were no men to support the Device family financially. One of their main sources of income was Jennet’s grandmother’s work as a cunning woman, which was a mystical role that could be described as ‘good witchcraft’. Local people would pay for illnesses to be cured and for lost belongings to be found, and Jennet’s grandmother was well known for this work in the area.

Jennet’s family also had to beg to get by. One day while begging, Jennet’s half-sister, Alison, yelled a curse (that she had probably learned from her grandmother) at a pedlar who had refused to give her money. All of a sudden the pedlar collapsed, having suffered a massive stroke. It was probably caused by the stress of the situation, but Alison didn’t see it this way. Horrified and believing she had genuinely cursed him, Alison begged for the pedlar’s forgiveness at his sickbed. The pedlar’s son reported her as a witch to the local officials and she was taken into custody. As she felt so guilty she confessed to practicing witchcraft, but she also pointed the finger at her grandmother and some of her neighbours too, including a rival cunning woman. She claimed they were all witches, and they were arrested.

While they awaited trial, Good Friday came around. In 1612 everyone was expected to attend church on religious occasions, and those who refrained were regarded with suspicion because of the immense political tensions of the time (King James was worried about a Catholic uprising as the gunpowder plot had been recently foiled). Instead of attending church for Good Friday, Jennet’s mother threw a party at Malkin Tower. This turned out to be a huge mistake – especially since she was Catholic and the local officials were already suspicious of the Device family.

The party was raided and Jennet’s mother, half-brother and all of the guests in the house were arrested for witchcraft and plotting murder – everyone, that is, except nine-year-old Jennet. There is no record of what happened to her during this time, but later that year, on 18th August 1612, Jennet was called as a witness in the trial of her mother, grandmother, half-sister and half-brother.

Although there were lots of witch trials held in those days, there was a 75% acquittal rate. However, as Alison was so distraught for thinking she had caused a man to have a stroke, she refused to defend herself and pled guilty to witchcraft. Her grandmother died because of the horrific conditions in jail, so that just left her mother, Elizabeth Device, and her brother, James, to be tried.

When Jennet was brought into the courtroom, her mother immediately began screaming at her – probably to try and make her young daughter realise the gravity of the situation. Witchcraft was, after all, a crime punishable by death. Jennet said she was frightened and would only speak if her mother left the room, so Elizabeth was dragged away. Jennet then stood calmly on the table and gave a considered, convincing testimony that outed her mother as a witch. She gave lots of detail about the various spells and murders she had committed. She also claimed that her half-brother was a witch and his spirit had killed three people.

When it was his turn to speak in court, James also denounced his mother as a witch, but this didn’t help his case at all. After Jennet’s articulate speech, Alison, Elizabeth and James were all found guilty and sentenced to hang for witchcraft, alongside some of the arrested neighbours who had attended the Good Friday party. Because hanging was such a public affair, it’s highly likely that Jennet watched them all as they died.

Did Jennet say those things because she was a poorly treated bastard child of an impoverished family and wanted revenge? It’s hard to say, but her influence didn’t just end with the deaths of her family. Across the UK and America, Jennet’s seemingly crucial evidence meant that children became credible witnesses in a court of law. The judicial system was forever changed from one young girl’s lies.

But these lies came back to haunt Jennet.

Twenty-two years later in November 1633, a ten-year-old boy called Edmund Robinson came home late. His excuse to his parents? He’d been picking berries when he saw two greyhounds. He tried to get them to chase a hare but they didn’t run, so he beat them with a stick. Suddenly, one dog turned into a witch and the other into a boy, and the witch then turned the boy into a horse. The witch took Edmund away on the horse to a barn full of witches, and there were hundreds of ropes hanging from the ceiling. When they pulled on the ropes amazing food came down. However, before anything else could happen in the barn, Edmund escaped. The witches chased him, but he got away – only to bump into a boy with hooves, who fought him, but Edmund won.

This incredible story was believed by his parents, and Edmund’s father spent three months taking him to different churches in the area to hunt down the witches from the barn. Because children were now deemed credible witnesses in a court of law, twenty women were accused and put on trial – and one of them, funnily enough, was Jennet Device.

The case became enormously famous. With Edmund’s testimony dividing opinion, it was eventually taken out of Lancaster to the courts of London where it was made into a play called ‘the Lancaster Witches’.

While trying to get more evidence, the doctors in London stripped the accused witches to look for teats that could suckle the devil on their bodies (as you do), and they found two marks on Jennet’s ‘secrets’. However, on further examination the marks were determined ‘nothing unnatural’. Things were starting to look a bit dubious. Eventually, when confronted in court, Edmund Robinson cracked and said he had made the whole thing up, and his father had taken him to different churches to blackmail women. They had accused anyone who refused to pay them of being a witch.

All twenty of the accused witches were acquitted, but that wasn’t the end of things for Jennet. She and some of the other falsely accused witches were still in prison in 1636. In those days, prisoners had to pay for their board and were forced to stay until their debt was cleared. This amount of money would have been an impossible sum for someone like Jennet, and as there were no more records of her after 1636, it’s safe to conclude that she died in prison.

This fascinating story seems ridiculous now, but has our judicial system got much fairer in 2018? Well, after listening to one too many episodes of the podcast ‘My Favorite Murder’, I’m inclined to say no…