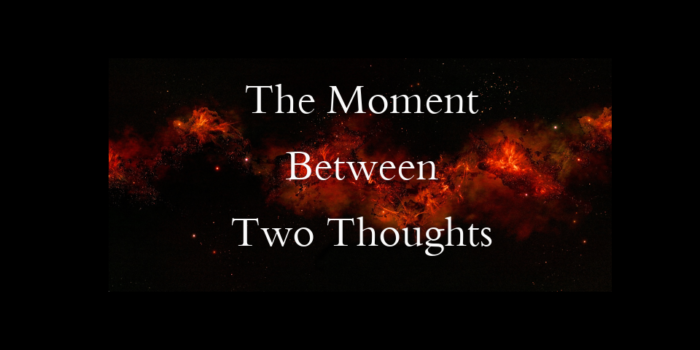 Despite the craziness of the outside world, Dystopic HQ is feeling all warm and fuzzy right now as Nick Crutchley was generous enough to send over an entire chapter from The Moment Between Two Thoughts, the first novel in his Quantum Dream duology series.

The Moment Between Two Thoughts is a science fiction, cyberpunk, dystopian novel in which society has been connected to Quantum Artificial Intelligences (QAI) by Psychnet. It allows people to live longer, become wealthier and, of course, spend more. But this capitalist heaven is hell for the environment – habitats are destroyed, the environment is polluted and mother nature is more or less smothered due to QAI.

The Preachers of Chaos, an eco-terrorist organisation aboard a starship named New Hope, are fighting to save biodiversity while shaping a ‘collective dream of those in stasis to deprogram them of avarice and egotism, and nurture a more ecocentric mindset’. But when a malevolent QAI emerges from Psychnet, a synthetic plague almost wipes out earth’s population. The QAI then sets its sights on ending the Preachers of Chaos’ collective dream as punishment for their ecocide…

You can get a copy of The Moment Between Two Thoughts on Amazon on Kindle and paperback, as well as the second book in the series, The Gate to the Great Beyond.

For now, here’s a sneak peek of the chapter ‘Abduction’ from The Moment Between Two Thoughts:

With fingers wrapped around my car’s steering wheel, knuckles whitening, I glance at a multifaceted diamond inlaid in the dashboard. An encrypted report, stored within the Dream Diamond, details how the Preachers of Chaos came to be, and why they blew up New Hope’s mission control on Mars. With trepidation, I say to EnviroSol’s quantum artificial intelligence, “Rachel QAI, upload the report.”

Data, history, concepts flood in. Patterns emerge. My cognition psyberware processes the information, and instantly I understand. The Preachers of Chaos believe the holograms that beautify our drab world somehow possesses people with an obsession of self, a need to consume, and ultimately, turns them into habitat-destroying ecopaths. The Preachers of Chaos rail against geoengineering, genetic engineering, and especially EnviroSol’s biggest cash cow, the synthetic biological organisms and ecosystems that underpin the global economy.

But why sabotage New Hope? Why destroy Gaia QAI and leave tens of thousands of pioneers adrift in deep space? With no QAI to geoengineer a new planet, those in stasis aboard New Hope will perish. How do the Preachers of Chaos gain? Unenlightened by the report, I say to EnviroSol’s quantum artificial intelligence, “Rachel QAI, connect me with Ramsey McDonald.”

A moment passes before the car’s Dream Diamond blazes. From it, rainbow fire rises and forms into the head of EnviroSol’s CEO. Ramsey speaks with a voice made smooth and pleasing by the diamond’s audio.

Glancing at the old man’s youthful face, painted effeminate with lipstick, rouge and mascara, I reply, “Party? Hasn’t the party been cancelled? For Christ’s sake, Ramsey, the board needs to meet, now.”

“Of course, the party has not been cancelled. Why would we cancel a flesh feast? And speaking of flesh, mine has arrived, all hard and shiny, fresh from his genesis womb. And guess what? He’s only wearing a sailor’s hat.”

“What? But New Hope is lost. EnviroSol’s stock is in free fall.”

“Darling, don’t bring me down. Tonight is party time. Just put your thoughts on hold, engage auto drive, and be cruised here in comfort. And that’s an executive order.”

“Ruby, can’t you see that I’m all a rush inside? Engage auto drive and have Rachel QAI fix you a drink. Chillax.”

I grip the wheel. “How the hell can I relax? How can you? You know what the loss of New Hope means.”

“Am I overworking you again? Stressed, are we? Poor Ruby.” Ramsey lip sulks momentarily, then brightly says, “Anyway, Moby is here, Moby is young, and Moby is most definitely buff. And my newly regenerated hip works better than the alloy ones ever did. No pain at all. So, should be fun-fun-fun!”

“Why, my flesh feast, of course.” Ramsey’s eyes narrow like a satisfied cat. “I’m calling him Moby because he’s big and lean and muscly, and oh, did I mention he’s wearing a sailor’s hat?”

“As in sailor’s hat, as in Captain Ahab?”

Ramsey licks his lips. “I do hope so.”

“For Christ’s sake Ramsey, this is no time to pump yourself full of lust. The board has to meet, and not at your bloody party, either.”

“Work. Work. Work.” Ramsey sighs. “Take my advice, Ruby: work hard, party hard, and let your immuno-psyberware cook you up something illegal. It’s the only way to survive times like this.”

“Chillax, Ruby. We’ll catch these Preachers of Chaos and throw them to the media mob. We’ll spin it as a crime against humanity, and hang ’em high in The Hague. Markets will bounce back, in time. There’s no need to panic. Just chillax and—”

EnviroSol’s CEO abruptly disappears as the Dream Diamond’s holographic fire morphs into the head of a man dressed in a glowing, indigo robe. The robe’s hood illuminates the man’s chiselled features and synthetic translucent hair. “Are you sitting comfortably?” he says.

Annoyed at the interruption, I ignore the advertisement and say, “Rachel QAI? What’s taking you so long? Get Ramsey back.”

EnviroSol’s quantum artificial intelligence does not respond, and the man’s holographic head persists. Solemnly, he says, “We need to talk, Ruby Wilcox.”

“Who are you? How are you doing this? Look, whatever you are selling, I’ve already got it.”

“Selling?” the man says, raising an eyebrow. “A stable climate and natural biosphere, I suppose. Though, I’m afraid, you’ve missed the Preachers of Chaos’ recent sale.”

Preachers of Chaos? “EnviroSol Emergency! Rachel, engage auto drive and get me out of here.”

“As you wish.” As the car accelerates into a turn, my head thumps the side window. “Sorry, never did pass my test.”

“Rachel! Rachel, please!” EnviroSol’s quantum artificial intelligence still monitors—I can sense her through my psyber neural interface. Why won’t she help? In desperation, I cry, “Take the car, but let me live. Take all my money, but please, don’t hurt me.”

“Money? Hmm.” The ecoterrorist chuckles. “Really? How much?”

“Woo. That much? Surely you can do better?”

“That’s all I can transfer immediately. Please, take the car, and the money. Just don’t hurt me.”

The hooded figure’s lips flatten. Drawn into his radiant emerald eyes, I hear, “Meditate on your first response to danger. Can you buy your way out of it? Is money truly all powerful?” Rainbow fire withdraws into the Dream Diamond, and with it the ecoterrorist.

My car enters dark streets, lit not by holograms but the fire barrels of the necrotic people—the city’s economic outcasts. Their grubby faces glance up as I cruise by, banging on the window.

Nick roams the hills of the Scottish Highlands in search of new fantasy, science fiction and other stories. He has worked as a teacher, environmental scientist and goat herder. On his blog you will find posts relating to his poetry, stories and adventures, experiences with mental illness, and concerns about humankind’s destruction of Earth’s biosphere.