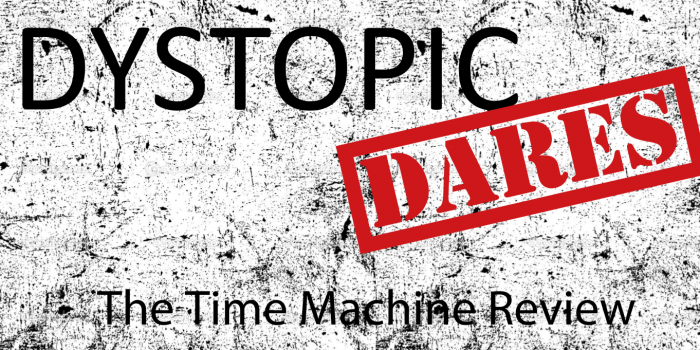 The Time Machine by H.G. Wells

The first book in the 4 books in 4 weeks challenge is The Time Machine, a classic science fiction novel with dystopian undertones running through an exciting time travelling adventure.

The book is narrated by an unidentified character who, along with a group of doctors, scientists and other professionals, has weekly dinners with an inventor simply known as the Time Traveller. The novel begins with the Time Traveller discussing the concept of the fourth dimension, that being time, before demonstrating the workings of a small prototype time machine. The machine is placed on a table and seems to disappear but, rather than believing it has travelled through time, many of the dinner guests determine it to be an elaborate magic trick. The narrator isn’t sure what to believe.

The following week the Time Traveller arrives late to dinner looking battered and pained. He demolishes his dinner and a few glasses of champagne within minutes before finally revealing to the party that he has successfully built a larger time machine and has been to the future.

The rest of the novel is comprised of the Time Traveller informing his audience of his adventures. He travelled to AD 802701 where he met small, childlike creatures that were clearly an evolution of modern man. The Time Traveller calls them the Eloi. These small people are happy and calm and live in large luxurious (yet run-down) buildings but do not work, eating only strange fruits that grow around the territory. They completely lack ambition, aggression or any real drive to do anything other than play and eat.

The Time Traveller assumes that the Eloi are a communist society that have conquered nature with the use of technology and now no longer possess or require intellect to survive.

As the Time Traveller explores his new surroundings he realises his machine has been taken. The Eloi are frightened and refuse to help him as the machine has been taken underground by pale, ape-like creatures that he names the Morlocks. These grotesque, fierce people live in tunnels surrounded by large neglected machines and industrial structures. The Time Traveller determines that the Morlocks were previously the working classes of this society who were forced to live and work underground, doing the Eloi’s bidding in order to keep society afloat. They have since evolved to see in the dark and are fast and monstrous. He also discovers that they kill and feed on the Eloi.

As the Time Traveller fights to retrieve his machine he discovers that intelligence derives from a response to danger; the Eloi are unintelligent because they have evolved to not need it, whereas the Morlocks now surpass them intellectually as they have had to fight in order to survive.

The novel is saturated in Wells’ opinions of class, the impact of scientific discovery, totalitarianism and Victorian politics to name but a few. It’s incredibly rich in symbolism and continually critiques both Victorian decadence and capitalism. The allegories used are plain and accessible even to modern readers but are so beautifully written that it doesn’t feel as though Wells uses the novel as a soap box. Adventure is delicately balanced with complex political connotations, making it both an enjoyable and satisfying read.

For a novel written in 1895 The Time Machine is surprisingly relevant and it’s clear to see why it’s so influential and has been adapted so many times. Wells’ writing style is beyond enviable; it’s not only a joy to read but it truly immerses you in the adventure, making a strange futuristic version of London easy to picture.

The Time Machine contains everything; marvellous prose, fascinating plot, thought-provoking ideologies and the description of the fourth dimension alone is incredible. If you’ve not read this densely compact novella I couldn’t recommend it more.