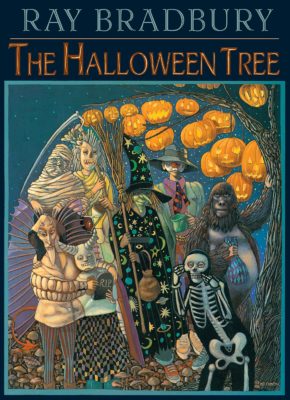 The Halloween Tree by Ray Bradbury

Anyone who has been following Dystopic for a while knows of my absolute adoration for Ray Bradbury. He is undoubtedly one of the best storytellers of all time, with an imagination and writing style that creates immeasurable envy in me. I love the disturbing imagery and unnerving moral quandaries of his short stories, particularly ‘The Pedestrian’, ‘The Veldt’ and ‘There Will Come Soft Rains’.

I expected The Halloween Tree to be in the same vein, but Bradbury’s 1972 novel is more of a fantasy adventure story than a horror. The book follows eight boys on Halloween night as they travel through space and time with Carapace Clavicle Moundshroud, a strange and enigmatic old man they Trick or Treated at his haunted house. During their adventure they learn the ways in which Samhain and Halloween are celebrated in differing cultures throughout history, all while simultaneously trying to save their friend Pipkin from various horrifying fates.

As with any Bradbury story, the imagery in this novel is simple, beautiful and joyfully energetic. I read it on my Kindle, which thankfully included the beautiful accompanying illustrations by Joseph Mugnaini.

I don’t doubt that children would absolutely love The Halloween Tree, but I found it a little dull at times. The plot was predictable and I felt there were far too many characters – it was impossible to connect with any of them, which is a shame since Bradbury was such a genius with characterisation. That being said, Moundshroud was hilarious and by far the best part of the novel, but I also found him a clear plot device and not nearly creepy enough to belong in a Bradbury novel.

There is an ethical question posed at the end of the Halloween Tree that I found incredibly intriguing and I would have loved for the characters to have deliberated longer over it, yet it was rushed and easily answered. It was a glimmer of the Bradbury topics I love to read about, but perhaps it would have been inappropriate for children if given more thought.

Definitely a story to read to children around Halloween time, but not something I would class as one of Bradbury’s best. It felt too restricted, as if he was all too aware of the age of his audience. It would have made a brilliant ’80s movie though. Overall I’m not disappointed, but I don’t feel I’ve had my Bradbury fix.