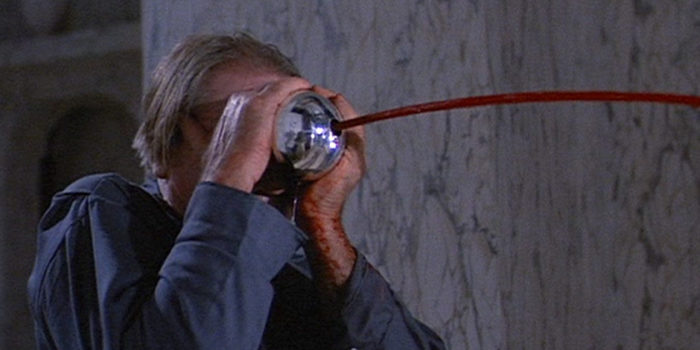 Okay, so I’m going to try and describe the plot of Phantasm. This won’t be an easy task.

Jody and his younger brother Mike are mourning the recent passing of their parents, but mum and dad aren’t the only tragic deaths to have occurred in this small American town recently. Mike blames a series of unusual deaths on the local mortician, who he calls the Tall Man. After an investigation Mike, Jody and his friend Reggie the ice cream man discover an alien conspiracy centred around dwarf slaves, bloodthirsty orbs and a strange white room in a mausoleum.

I can see why cult film fans have fallen in love with this very low budget 70s horror. The acting and dialogue may be terrible, but the passion and enthusiasm for the project is palpable in every scene. It must have been great fun to shoot, and the effects and creepy hooded figures are both fascinating and genuinely horrifying.

On the whole it was quite entertaining to watch, but I found the clumsy (almost nonexistent) plot, random guitar-playing and unnecessary breast exposure to have lessened my enjoyment rather than inspired any sense of affection. Bar the few gruesome scenes that used exceptional effects, camera work and lighting, I found that Phantasm continually attempted things that were beyond its reach. Perhaps that’s the cause of its cult classic status, and maybe if I’d seen it in the 70s I would view it differently, but from an overly privileged 2017 perspective I was not hugely impressed.

A functional plot is never viewed as a necessity in the horror genre and I still can’t work out why. It lessens the fear element and removes the audience from the experience.

I’ll probably get a lot of flak from horror enthusiasts, and I do appreciate why, but I wouldn’t watch Phantasm again. Maybe I’ll watch another one in the series at some point in the future, but I think I need to recover from my disappointment of this one first.