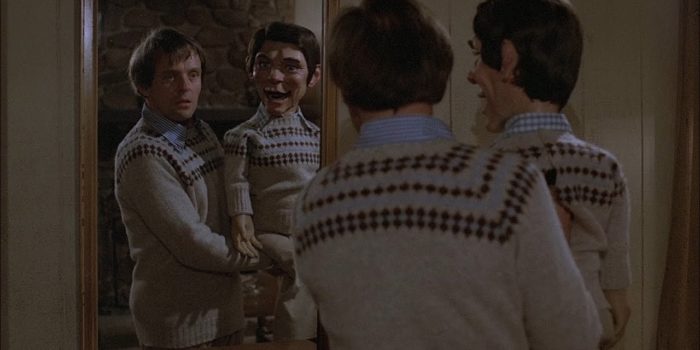 Before I begin, I’d just like to formally state that I don’t condone ventriloquist dummies in any shape, way or form and believe they are a stain on the history of entertainment. They are vulgar and nothing short of an abomination, along with Punch and Judy and all other forms of puppetry (with the exception of Sooty and Sweep).

Now that’s out of the way I shall continue with the review. Magic is a 1978 psychological horror in which an unsuccessful magician named Corky, played by Anthony Hopkins, decides to better his failing routine by adding a sassy, back-talking ventriloquist dummy to his act. The inclusion of Fats the dummy works, and Corky soon becomes a huge success. He is close to bagging a television show but runs away to his old home town, claiming to be frightened of success when in reality he fears the medical examination he will have to undergo as requested by the TV network. Corky has several issues he is scared of revealing and is also finding it increasingly difficult to control Fats offstage.

When he reaches his home town he reunites with Peggy, a woman he was in love with back in high school. She is married but has always loved him too, and they start an affair. What ensues is a fight between a want for success and true love, as well as a power struggle between a mentally unwell man and his aggressively straight-talking dummy…

I really enjoyed Magic. Corky is a particularly fascinating character as he is so painfully torn in so many aspects of his life, to the point where I wasn’t sure whether to fear him or pity him. I appreciated the lack of detail in regards to Corky’s introduction to Fats and the uncertainty as to whether Fats was alive or just an element of Corky’s neuroses, something I think would be spelled out to the audience if the film were to be remade today.

As with most respectable films made before the 90s, the plot really took its time to unfold. I was able to get a real sense of the characters in a way that made it feel more like a drama than a horror, which in turn made it all the more horrifying as the film reached its conclusion.

There are parts of the film that have dated rather badly, and I wasn’t entirely sure whether Hopkins was supposed to have an American or an English accent, but Magic is a brilliant depiction of obsession and success for a creative mind. Not recommended for sufferers of automatonophobia though.