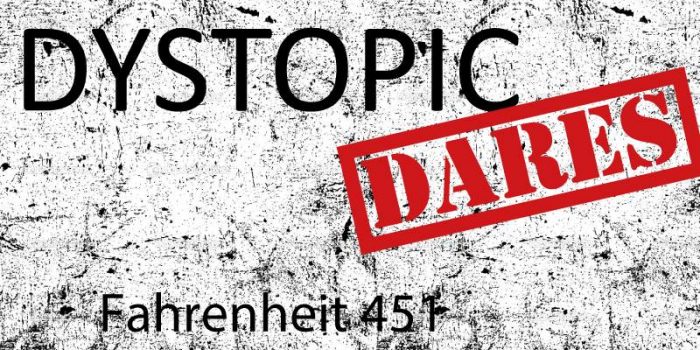 The fourth and final book in the 4 books in 4 weeks challenge is Fahrenheit 451, one of most renowned novels in the dystopian genre.

If you’ve been a follower of Dystopic for a while you may have noticed my slight admiration (obsession) for Ray Bradbury. To me Bradbury was one of the greatest writers of all time with a seemingly effortless writing style and uniquely disturbing story ideas.

So it comes as no surprise that I loved Fahrenheit 451. The novel is set in a dystopian America in which books are outlawed and burned by ‘firemen’ (houses are fireproof so firemen are no longer required to extinguish fires, but they have been repurposed to start them). The protagonist, Guy Montag, a fireman, lives a simple life unquestioningly burning thousands of books, bewildered as to why anyone would want to own them in the first place. One day when walking home from work he encounters a strange yet captivating seventeen-year-old girl named Clarisse. Clarisse has an interesting scope on life and as they spend more and more time together she begins to change his way of thinking, encouraging him to reflect on the books he burns and to question his dull, sheep-like existence. Soon, dissatisfied with his life and feeling lonely due to his wife’s blinkered adoration for the parlour walls (interactive television) he decides to give in to curiosity and steals a book.

Fahrenheit 451 is often thought to be about the censorship of books, but this couldn’t be further from the truth. The novel is actually about originality and uniqueness, going against the norm despite the backlash, individualism for the sake of individualism and non-conforming in creativity as well as in day-to-day life. It is about striding out on one’s own, being curious and emotional and experiencing as much as humanly possible despite the discomfort that it causes.

Guy is frustrated at everyone around him as they either fail to acknowledge that they’re miserable and bored or actively choose to ignore it. Unlike most dystopian novels Guy is not the catalyst of a revolution or a brave rebel fighting for what’s right; he’s clueless and confused and he doesn’t know what to do for the best. He’s changing and thinking about life in a whole new way, but he has no army, no arsenal, he isn’t charismatic enough to become a leader and he has no clue how to fight the widespread numbness that has fallen upon America. What’s most interesting here is that there is no totalitarian government pushing for this indifference to life, just opportunist politicians who have noticed the increased apathy among its citizens and capitalised on it.

I found this a very difficult read at times because it felt so close to the bone. I have noticed how openly as a society we embrace bland, repetitive films and sequels and remakes, refusing to read original fiction and remaining dedicated to the hundreds of reality shows broadcasted year on year on television. Bradbury somehow foresaw all this happening and I feel like Guy, too cowardly and ill-prepared to do anything about it. How do you stop a dystopia that is self-initiating and self-contained?

This novel is one of the best and most unique dystopian novels I’ve read. It’s not your classic totalitarian tale as the antagonists are also the people who need saving. If you also feel frustrated by the blandness of modern films, music or novels, Fahrenheit 451 really is a must-read. Devastating and terrifying in a way that only Bradbury could have come up with.