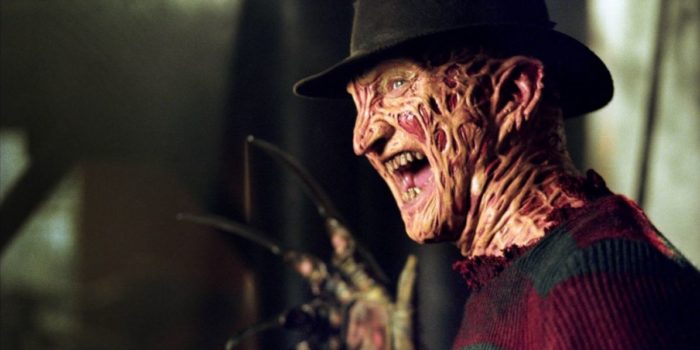 Another 80s horror classic that has stood the test of time.

The movie opens with highschooler Tina being chased through a boiler room by a burnt man with a bladed glove. Just as she is about to be killed by him she wakes up to realise it was all a terribly realistic nightmare. The next night, home alone and scared of going to sleep by herself, she invites her boyfriend, Rod, and friends Nancy and Glen, to sleep over. However, the moment she falls asleep her friends can no longer help her as the disfigured man is waiting in her dreams. It soon becomes apparent that this evil presence is not just in her head either, but is very, very real…

I expected to be entertained by A Nightmare on Elm Street, seeing as it is such a classic, but I didn’t expect to be so frightened by it. Freddy Krueger was genuinely creepy with his maniacal grin as he chased the teenagers through their nightmares, and the dream obstacles (particularly the sticky, sinking stairs) were petrifying as they were so recognisable from my own nightmares.

The premise of the movie was simple yet strong, and although the characters were incredibly two-dimensional, they possessed enough personality and likability to inspire a fear for them.

There was some terrible acting, bizarre outfits and enough hairspray to ignite a small English town, but the special effects well and truly made up for all of that. This kind of artistic direction, with the use of effects rather than CGI, will truly never date. My boyfriend rightly said, “There is something comforting and impressive about being able to see how the special effects are made,” and I couldn’t agree more. Characters crawling on the ceiling may have been the result of the set being turned upside-down, but it didn’t detract from the absolute eeriness of it. In fact, it was somehow heightened.

A Nightmare on Elm Street defied my expectations, I am very pleased to say. I don’t think the sequels will make quite the same impact on me, but I plan to watch them anyway. Like millions of others out there, I really want to see more of Freddy Krueger.

I hate to sound like an old bore, but they really don’t make them like they used to.