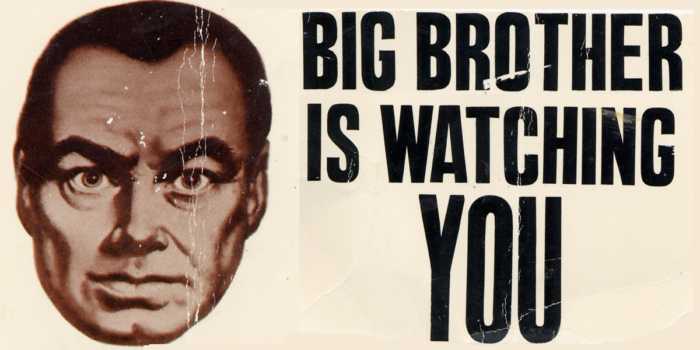 There’s no doubt about it – we’re living in a dystopian reality. Here’s five reasons why: 1) Individuals in power are making decisions for us

The UK government is becoming increasingly undemocratic. Theresa May has decided that there was ‘no alternative‘ to the air strikes in Syria, and she is not ruling out further military action either.

There have also been incredibly undemocratic decisions made in regards to Russia, Brexit and the general economy. It is clear that both the general public and certain sections of the government have no voice, especially if the disputes clash with particular plans or alliances. 2) History is being rewritten or deleted

There has been a real call lately for history to be rewritten, deleted or moved out of sight, especially if it acts as a reminder of unpleasant errors, bigotry or inequality.

Posthumous pardons are one of the many ways we’re brushing past mistakes under the carpet, such as Alan Turing’s in 2013. Although it is vital for these blights in history to be addressed and clarified as wrong, to me pardons are mainly used as a way for the government to exonerate themselves. There has to be a more positive and practical way of tackling homophobia, surely?

Kanye West has also recently stated his desire to hold less importance over history and photographs.

I’ve got a concept about photographs, and I’m on the fence about photographs — about human beings being obsessed with photographs — because it takes you out of the now and transports you into the past or transports you into the future. It can be used to document, but a lot of times it overtakes [people]. People dwell too much in the memories. People always wanna hear the history of something, which is important, but I think it there’s too much of an importance put on history.

Our history, no matter how unpleasant or wrong, is a stark reminder of how far humanity has come. Without it, we cannot tuly be in the ‘now’, because we’re whitewashing what the ‘now’ actually is. Cambridge Analytica accumulating data without permission. Amazon’s Alexa recording conversations. Apps tracking your location and activity, even when not being used. Smart phones switching on when you glance at them.

In the age of technology, we’re not only being watched – we’re choosing to be watched. We want our everyday devices to be more responsive, more personalised and more intuitive than ever, but what is the price we have to pay for that?

An episode of Black Mirror called ‘Shut Up and Dance’ is about two men threatened by a hacker who has filmed them doing things they don’t want made public knowledge via their phones and webcams. But this isn’t a fictional premise – there have been real cases of this happening to normal, innocent people.

What if someone managed to get a photo of you getting changed in your bedroom and threatened to put it online for all your family, friends and colleagues to see? How far would you go to stop that from happening?

Similar example in dystopian fiction: We by Yevgeny Zamyatin According to Anxiety UK, one in six young people will suffer with some kind of anxiety disorder. The UK student suicide rate has risen 56% in ten years according to reports. 300,000 people leave their jobs every year because of mental illness.

So what’s happening here? Are mental illnesses being misdiagnosed? Are we becoming more perceptive when it comes to psychological issues? Or are we living in a society that is making us unhappy and distressed?

There are numerous factors at play here and there’s never going to be a simple, black and white answer, but we do seem to be developing more social anxieties, feelings of hopelessness and apathy in society. 5) Entertainment is mean spirited and voyeuristic

Reality television is still hugely popular with the general public, particularly shows on people exposing their private lives, real-life car crashes, people in debt getting their stuff taken away by bailiffs and arranged marriages disguised as blind dates. We’re used to seeing horrendous and often cruel things everyday on TV, which is undoubtedly desensitizing us to it. It’s also blurring the lines between fiction and reality.

The problem with this is the more we’re desensitized we get to what we see, the more risqué and sensational we want our entertainment to become. We may believe we’re a world away from enjoying gladiator tournaments and public hangings, but humans will always have a taste for the macabre. The only difference these days is that we watch it all through a screen.

Leave a Reply to no name Cancel reply