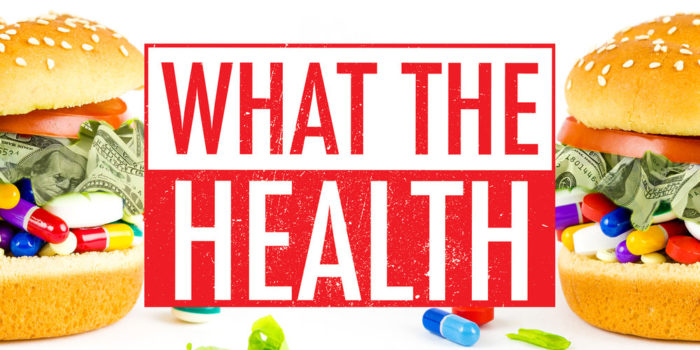 American documentaries definitely have their tropes. What the Health has the typical foreboding music, contrived revelations, blatant agenda and ominous voice-overs as well as manipulative editing, unbalanced evidence and heavy-handed sentimentality. What I found particularly frustrating was that the continuous ‘no comment’ responses from companies were seen as shocking and conclusive disclosures of guilt, when in fact it was just a frustrating termination of communication. The filmmakers were in such desperate need for a structured battle between good and evil (the good guys being vegans and the bad guys the meat/dairy/pharmaceutical industries) that they moulded whatever they could to make every situation seem black and white. If you have done any research into veganism, you will know that there are few issues on the subject that are completely black and white. The conclusion is always to go vegan, but the evidence is usually complex.

For a market used to seeing slick, multi-million blockbusters I understand the need for these types of tropes, yet they fail to convince anyone who isn’t already invested in the topic. For me, documentaries should attempt to be as balanced as possible in their arguments so as to convince the viewer that what they’re seeing is the truth. Reality isn’t a movie, and although an element of creativity is required to make a satisfying and worthwhile film, I feel What the Health went way too far in its desire to shock and entertain.

For instance, at one point there was an accusation that the dairy industry was guilty of institutionalised racism. I’m not sure this comment, said in such a blase manner, does the fight for veganism much good.

That being said, there were a lot of incredibly hard-hitting facts and video footage in What the Health that devastated me, including the following (proven) statements:

What the Health is a documentary made by vegans, for vegans. Although I doubt it will ‘convert’ many meat-eaters, it sure as hell makes a good argument for staying vegan.