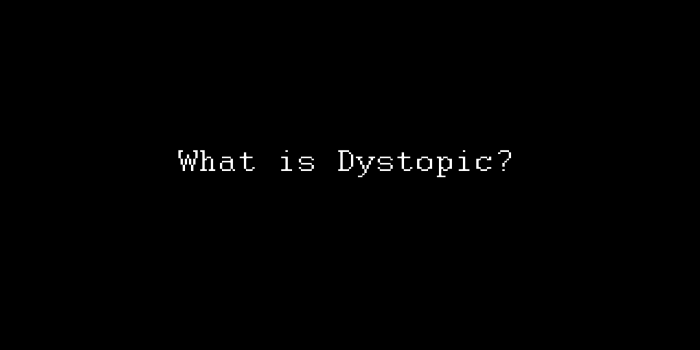 I’ve been asking myself the same question for some time now.

I used to describe it as a platform for which I reviewed dystopian fiction and discussed the themes and context surrounding the genre, but then I self-published a novel. Now everything has changed.

When I first started Dystopic, I was a brutal critic. Actually no, I was never that, because criticism is a difficult and complex art form – I just posted spiteful rants on a blog. My ‘reviews’ were inexplicably hateful. I did write some good articles that I’m proud of, but that only amounted to about 25% of what I published.

A few years into Dystopic, the regularity and quality of my blog posts dwindled when I started writing These Unnatural Men. I find it very difficult to work on more than one personal project at a time as I am a full-time copywriter, so I decided to pick the novel over the blogging. I don’t regret that decision, but I do regret being so half-arsed with it. I should have gone on hiatus or blogged once a month instead of fluffing something together once a week.

When I eventually finished and self-published These Unnatural Men, I had flashbacks to all those times I sneered at the novels I was sent to review. I felt sick. If someone were to shit all over my novel the way I had over so many others, I knew I would crumble. Writing a novel is such an exhausting and emotional journey, and you’re not done when you’ve finished the numerous drafts, edits and read-throughs. You then have to push that big fat ‘publish’ button, then beg people to read it.

Oh, and then you have to listen to what they think.

It was at that point that I actually read through my old blog posts. I subsequently either edited or deleted the most eye-wateringly vicious tirades. If I felt that I still stood by their underlying message I kept them as they were, but that didn’t happen very often.

I’ve been unbelievably lucky with These Unnatural Men. If karma existed, I would have been absolutely trashed online. Fortunately I’ve had nothing but positive, genuine and honest reviews (so far…touch wood and all that). The criticism has been well thought and encouraging. I feel like I don’t deserve any of it and it’s been a very humbling experience.

I’m starting book number two now, and I feel like I am a completely different person to the one who started Dystopic in 2012.

And thus we come to that lingering question: what is Dystopic?

I don’t want to abandon blogging completely, nor do I want to do a half-arsed job of reviewing a handful of dystopian short stories every other week. I want to be genuine, entertaining and level – that is, level-hearted and level-headed. I want it to reflect who I am, whereas before I wrote trying to impress and shock.

So who am I? Well, I’m not a critic, that’s for sure. I have tried desperately to write clever and interesting reviews, but that just isn’t me. I love discussing fiction, but I won’t be getting hired by the Guardian any time soon.

I still want Dystopic to focus on dystopian fiction, but I want to allow myself to be more relaxed about how I write about the genre. I’m not an expert, so why have I written for so long as if I am one? I’m an enthusiast. A collector. A hobbyist. And I’d rather be seen as that, because that means I can still enjoy what I read. After all, chefs don’t often enjoy cooking at home, do they?

Dystopic will probably become a monthly blog to allow me to write my novel, but what I write about will be as much of a surprise to me as it will be to you. Whatever happens, I hope you enjoy it. I’ll make sure I do at least.

Oh, and if I’ve ever reviewed something of yours in a less than polite fashion – I sincerely apologise. No one who puts themselves out there and creates something earnestly deserves to be ridiculed, even if what they produce isn’t deemed ‘good’ by certain individuals. A bad review is one thing, but a bad reviewer is unacceptable.