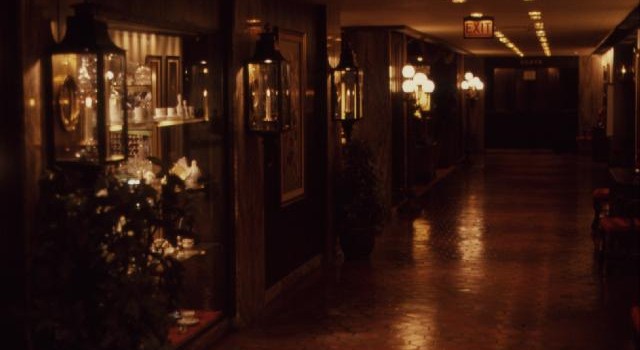 It didn’t look like a hospital corridor. The walls were covered in a rich, dark wood and the seats of the chairs were made of red velvet.

It smelled like a hospital though. A mixture of cleaning chemicals, musk and traces of human waste. Faeces? Vomit? Maybe both.

One of the doors in front of me led to my grandfather. He could have been dying metres away from me at that very moment for all I knew, but then what actually constitutes as dying? At which point does someone transition from the process of being alive into the process of being dead? Perhaps it’s more a case of percentages; some parts of him were still going but a larger proportion was already gone.

My sixteen-year-old mind couldn’t fathom what mostly dead would look like. For weeks I had nightmares of hollow eyes, a slack mouth and yellow, melting skin. I tried to imagine my reaction to the corpse’s violent expulsion of hot bile, a scream, a shriek, a gasp. How was I supposed to react?

Crying seemed to be the obvious option, to show how much I was mourning the active passing of my relative. But I knew I wouldn’t do that. I would show disgust and repulsion. It was going to be a horrific experience that would stick with me forever. People always say watching someone die never leaves you, so whatever happens must be absolutely terrifying.

I was trying to remember what my grandfather looked like the last time I saw him when my mother left the doctor’s office at the end of the corridor. She was wearing her work clothes, which I found odd seeing as it was a Saturday.

She was nodding to the doctor, mming and hmming. They eventually shook hands and she walked over to sit down beside me, laying her purse neatly across her lap.

“The doctor said it won’t be long now,” she said, smiling in what I assumed to be an attempt at reassurance. The expression looked even more unnatural considering the circumstances.

She sighed, her hand suddenly resting on top of mine. It was cold and pillowy.

“Yes,” I said. I would’ve answered truthfully if her hand hadn’t distracted me.

“Thank you for coming with me, you’ve been really brave today and I do appreciate it. Granddad really wanted you to be here. Your sister is far too young and your Dad has to be with her so…”

She allowed her expression to flatten. Her energy was dissipating.

“The doctor told me that I should probably prepare you for what’s going to happen in there. Granddad might look a bit different and act a bit strange, but he’s still your Granddad. Remember that when you go in there.”

“Won’t be long now,” she said, finally removing her hand. It left an icy handprint but I didn’t want to warm it in case it looked like I was wiping her from me. “When they call us in don’t forget to remember him like…well, like he was. When Nan was still alive. He’d like that.”

When my grandmother was alive we would visit fortnightly. Their house smelled of talcum powder and boiled meat no matter what time of the day we got there. Everything was spotlessly clean yet all surfaces had a tacky feel to them, as if the dirt had been trapped under layers of polish. My grandmother would grin as we arrived and sulked as we left. My grandfather watched us from the corner of the room like we were a television show he had seen before.

At her funeral my mother was in charge of everything and pretended that her cheeriness was just an act, when in fact she was in her element. She told hilarious, rehearsed stories. My grandfather was bemused by the whole thing and told my mother to stop making such a fuss. A week later the house smelled different. Everything was the same but nothing fit back to where it had been before.

On my sister’s third Christmas she placed all of her presents onto my grandfather’s lap. Toys, books and clothes were piled high on his legs and stomach. He looked ridiculous. She squealed until they fell onto the carpet in a mini avalanche. My mother told her off and she cried and sat by his feet for the rest of the day. I saw him shuffle his foot away from her so that they weren’t touching.

Those few snatches were all I was able to recall. Beyond that I couldn’t even remember his first name, how old he was, where he had moved to after they sold the house or even what he was dying of. I suppose that’s irrelevant.

The thought of touching his warm corpse made me feel sick. Would I be forced to touch it, to say goodbye to it? Kiss it? Did bodies move after they died? I could imagine they felt rubbery and moist. What if I thought he was dead but he wasn’t? How can you tell?

Babies are born every day and old men like my grandfather die every day – yet I knew nothing of either. They are natural events that most people come across at least once in their lives, but why are we not automatically programmed to deal with them? It was the forced formality of the whole thing that felt the worst, a big grand build up to something that would be pitiful and last a few minutes. If my grandfather clutched his chest and died right in front of me I would’ve dealt with it with no waiting, thinking, or imagining. No staring at a closed door.

The doctor made us both jump. My mother stood quickly and smiled and nodded and shook his hand unnecessarily. I started to smile but quickly stopped myself. It felt wrong.

He led us to a door that was the same as all the others, except it had a familiar name displayed on a small screen beside it. I read it over and over but it didn’t seem like anything to do with me. That wasn’t my grandfather; that name sounded like a real person. My grandfather only existed for a few hours every fortnight.

The doctor moved aside so that I was forced to be the one to open the door, to be the one who saw him first. With a horrendous squeak I pushed down the handle to reveal a bright orange room with a large white bed. My grandfather was not in it.

I stepped inside and spotted him by the bay window, balancing a suitcase on the ledge while stuffing his clothes haphazardly into it. He was taller than I remembered and much broader. He was wearing what looked like white surgical scrubs.

“Dad? What are you doing?” my mother asked.

He briefly turned to look at her, shrugged and then thrust a pair of socks down the side of a mound of shirts he had just made. “I don’t want to be useless, do I?”

My mother pushed me out the way and grabbed his elbow. “Go back to bed, the doctor said you should be in bed.”

Sighing, he allowed himself to be taken away from his suitcase. As he laid on top of the covers he seemed to finally notice me, his slightly flushed face irritated and frowning.

“You said you wanted him here, Dad.”

“Why don’t you let me finish packing? There’s things that need to be packed.”

I stepped a little further into the room because I felt obliged to, but I instantly regretted it. I felt exposed. I turned to see if the doctor was behind me but he had gone.

The relief that rushed through me was so intense I was sure it was audible. I didn’t want to watch him die. But if I didn’t I’d never get the opportunity again – would it turn out to be something poignant that I would regret? I’ve heard people say they were grateful to have been there ‘at the end’. Would I be grateful?

My heart sank as I looked at my mother. She would make sure I would stay, I could see it in her flat eyes and expressionless mouth.

My grandfather was still staring at me. He lifted a blue-veined hand and said, “Come here.”

I approached the bed, my legs feeling cold and gelatinous. I wanted to hold something for support but I was so petrified of him touching me that I stayed a good metre from the bed. He noticed and beckoned me further forward.

“Well, yes, I suppose that’s right.” He then gave an odd laugh, like he knew what it should sound like but didn’t know what it meant.

I had to turn away from him, and as I did the doctor was standing by the door with a small young woman by his side. There wore blue grey masks over the lower halves of their faces and the woman was holding a tray with a single syringe on it.

So that’s how it worked. No tubes, wires, beeps, tremors, spasms, screams. Just one small needle.

I turned back to my grandfather one last time. As he spoke I knew he was addressing me even though his eyes remained fixed on the man and woman by the door.

“Don’t give yourselves to these unnatural men – machine men with machine minds and machine hearts.”