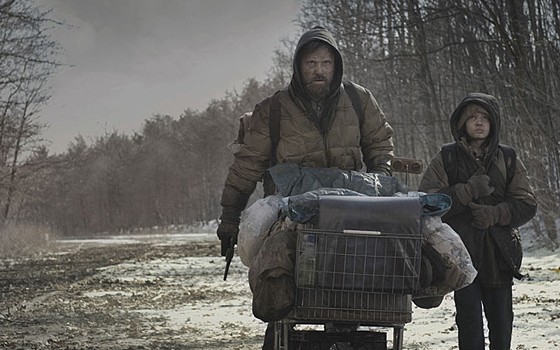 The Road by Cormac McCarthy

So what is this novel is about? Well, it’s about death. And misery. And pain. And ash and dirt and starvation and death and ugh.

A nameless man and his son, in the midst of some sort of apocalyptic wasteland, are travelling along a road in order to get to the coast. As they travel they encounter cannibals, corpses and a host of other cheery little characters. Why are they travelling to the coast? Because. Because there might be some sort of salvation awaiting them there, but probably not. They’ll probably die horribly along the way, sad and cold and hungry. Like most of the other people in the world have already done.

I think to truly put across the bleakness of this novel all I need to do is quote directly from it. One of my favourite descriptions of the characters’ surrounding environment is ‘ashen scabland’. I also enjoyed the paragraph that read, ‘Do you think that your fathers are watching? That they weigh you in their ledgerbook? Against what? There is no book and your fathers are dead in the ground.’ Lovely.

There’s not a great deal to say about this story. Some of the descriptions are beautiful and thought-provoking in a terrible, awful way, and the situations that the characters find themselves in are close to what you would expect from an environmental dystopia, but…ugh. I really got the sense of desperation, struggle and suffering that McCarthy clearly wanted to present to his readers, but did I enjoy this? Did I learn anything? Did I think about it after I had read the last page?

No. I threw the book across the room and watched a cat video on Youtube to stop myself from contemplating suicide.

The novel is indeed weighty and has a definite impact, but I personally don’t associate gloominess with artistry. To a certain extent anyone can describe incident after incident of morbid dreariness, but I crave a tangible plot, despite how superficial McCarthy makes me feel by saying that. It’s like a painting: it doesn’t have to look like real life, but I at least have to know what it is or what it’s expressing.

I quite enjoyed the style of which The Road was written. It astounded me how there were no speech marks yet it was very clear whenever a character was speaking, and the mercifully short paragraphs were an absolute godsend (as I found I couldn’t read more than a few pages of the book without crumbling into deep despair), but the style was a mere distraction from the blinding misery on each page.

It is without doubt that this book deserves some sort of recognition, but I’m not entirely sure why. I encourage novels to disturb and horrify me in order to teach me something or challenge my perceptions, but all that The Road did was drain me of my soul. I mean, come on, look at the below extract and tell me you don’t want to plunge your face into molten cheese in order to distract yourself from a hefty dollop of brain pain:

What’s the bravest thing you ever did?
He spat into the road a bloody phlegm. Getting up this morning, he said.
Really?
No. Don’t listen to me. Come on, let’s go.