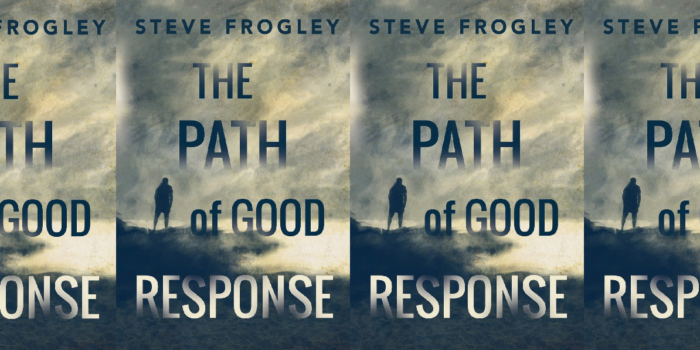 The Path of Good Response by Steve Frogley

I think we’ve all been asking ourselves hypothetical moral questions this year. Would you rather isolate yourself for months and stay (physically) healthy, or see your friends and family and risk catching a deadly virus? Or would you rather try a rushed cure for the aforementioned virus to help the economy recover, or wait a bit longer and continue risking your life every time you visit the shops?

The Path of Good Response by Steve Frogley is full of these would-you-rathers. The protagonist. Joe Massey, is a sweet but self-doubting recent graduate in desperate need of money. The novel starts moments before he is due to have an interview for a graduate scheme with Schelldhardt, the biggest company in the world. What the scheme entails and what the company does is not at the forefront of his mind – all he knows is that it’s highly sought-after, and his student debt would be taken care of from day one of employment.

The catch? He can’t contact anyone outside of the company for an entire year. He will have to dedicate a lot of himself to this new role, but as his three friends – one of whom is his unrequited love, Rachel – are all competing for a space, he decides to go for it. How much could he lose if he doesn’t have much in the first place?

The interview process at Schelldhardt is…odd, to say the least. In the first round, for example, all the graduates in the room are asked to vote out the candidates they don’t want to progress to the second round. Should they get rid of the competition? Or wheedle out the weaker members of the room? Should everyone work together? Or should they refuse to vote entirely?

The whole thing is a thinly veiled test to uncover personality types, but Joe makes it through. Eventually he gets a place on the scheme, along with all three of his friends.

On his first day he arrives at a dock where a large cruiser awaits him. This is where he will work as the ship sails across the sea, cut off from the world. Life on board the cruiser reminded me of Dave Egger‘s The Circle – a Facebook or Google-esque office culture, with plenty of extravagant parties and unhealthy working habits. Joe appreciates the luxuries he is offered and partakes to some extent, but something doesn’t quite sit right with him. He can’t quite fall in love with Schelldhardt the way his friends and colleagues are – especially when a crazed naked man rushes him to warn him about his new employers…

The new Schelldhardt starters are given their roles and departments, and that’s when Joe finds out each department works in silo. He won’t be able to speak to his friends, or Rachel, for god knows how long. And then to make matters worse, at night he begins to have these weird dreams where his morals are questioned in various scenarios. Is he going crazy? Is working at a prestigious company like Schelldhardt worth it? What exactly are they doing on the ship? And where does Joe fit with all of this?

From the first few pages of The Path of Good Response, I felt completely at home with Frogley’s writing. There are just some writers that make it known pretty early on that you’re going to really enjoy the story they’ve created. Frogley fed just enough information about the characters to keep them intriguing, described a believable yet peculiar world and threw some perfectly timed twists and turns that I didn’t see coming at all. It was all in all a joyous ride, which is not something I find myself saying very often with dystopian fiction. It’s difficult to put forward moral quandaries without offering a black and white, cold and distanced view of the world, but there was a lot of heart and soul in a story that focused so heavily on the negative aspects of human nature – particularly what people would do for personal gain.

I think what really made The Path of Good Response feel so real, so gripping and ultimately so petrifying was the fact that there were various perspectives shown throughout the novel. It wasn’t just ‘us and them’, which again is often the case with dystopian fiction – throughout the novel you grow to understand why Schelldhardt worked in the way it did, what drove the people who worked there and how easily it would have been to get caught up working for such a powerful conglomerate, despite the warning signs (e.g. the crazed naked man).

That being said, I would have liked to have got to know Joe a little more prior to his life at Schelldhardt. There was so much hinted at with him, and I don’t usually want things to be spelt out for me in fiction, but I really wanted to understand his drives – as well as his relationship with his mother, which turned out to be quite an integral part of the plot. This lack of clarity did make him more intriguing and unpredictable, but perhaps more flashbacks would have made the big twist at the end even more explosive (no spoilers, of course!).

I also found Joe’s unrequited love for Rachel a little baffling. She wasn’t a particularly likeable person, which is fair enough – the fact that she didn’t like him back but led him on felt plausible, but I failed to see any positive traits to her, even through Joe’s eyes. Why would he join Schelldhardt with her and sacrifice so much for her when she was so standoffish, and even downright mean at times? Perhaps if she had been more sympathetic I would have understood Joe’s character better and not wanted more of a back story.

But this was a minor sticking point for me. Ultimately The Path of Good Response was one of the most unique contemporary science fiction novels I’ve read in recent years, and I really didn’t foresee any of the twists and turns. Intriguing and captivating from start to finish, this though-provoking novel really makes you question what’s important – even more so given the strange times we’re living in.

If you’d like to read an excerpt of the novel, Steve Frogley was kind enough to provide one for me for Dystopic back in September.