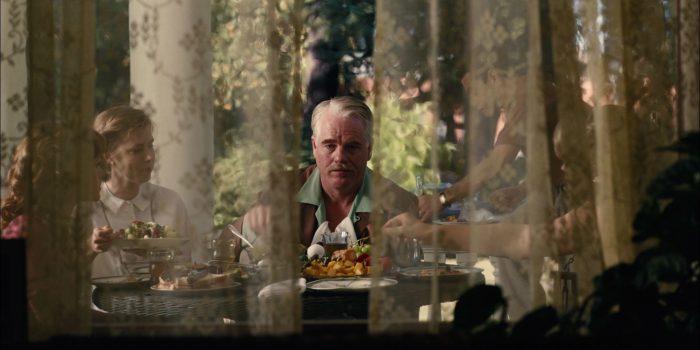 Cults, totalitarianism and strict religious sects have always fascinated me.  Why is it that some thrive on power whereas others feel a desperate need to be controlled? There are very specific types of people who become the followers, the second in commands and the leaders, and this dynamic was portrayed almost flawlessly in Paul Thomas Anderson’s The Master.

The film follows Freddie Quell, a World War II veteran with a severe addiction to alcohol and sex that inhibits him from living a normal life. He flits from dead end job to dead end job, from state to state, continually making mistakes and getting himself into dangerous situations until he eventually finds himself with no money watching a ship preparing to set sail. Impulsively he jumps aboard and proceeds to get blackout drunk, waking up the next morning to learn that the ship had hosted the wedding of Lancaster Dodd’s daughter. Lancaster Dodd is the Master.

The Master is the leader of a philosophical movement called The Cause. The parallels to Scientology are beyond suggestive despite Anderson claiming otherwise (I really recommend watching the documentary Going Clear before watching this to get a sense of how The Cause functions and the kind of people who would follow such a movement). Lancaster tells Freddie that The Cause could help him to improve his life if he practices the various exercises he prescribes and follows his teachings. Lancaster sees something in Freddie, something powerful and important to his movement, and despite Freddie’s volatile nature Lancaster makes him something akin to an assistant. Freddie quickly becomes a dedicated follower having needed some sort of authoritarian figure in his life to guide him, however his self-destructiveness causes continual problems for both himself and The Cause. Lancaster also struggles to maintain his grip on what can be only described as his ‘cult’ due to outsider sceptics and legal issues.

What I loved most about the Master were the infinite amount of detail throughout. Phoenix clearly put a lot of work into his character and from the way he carried himself to the way in which his mouth twitched, he is an almost painfully fascinating presence. Hoffman is just as captivating, beautifully portraying a charismatic control freak on the brink of losing his sense of authority.

Amy Adams’ performance was absolutely abhorrent – in a good way, of course. There was a vile spite in her character throughout and Adams’ performance somehow managed to match the quality and power of the two incredible actors beside her.

The overall style of the movie was subtle and minimalistic but was so complex beneath the surface that the plot was occasionally confusing. Anderson’s balance between revealing too little and just enough to enthral almost tipped at times, but for me this merely requires a second viewing to grasp the film’s delicate storytelling.

The Master successfully demonstrated just how simple the concept of control is. Lancaster is nothing more than a confident and charismatic man, and just by delivery and presence he accumulates a huge following. Freddie, who is arguably smarter than Lancaster, is severely damaged and plagued by self-doubt. Lancaster preys on these sorts of weaknesses in an almost endearing way, masking his need to control as a desire to help.

Fascinating, disturbing and powerful, this movie is definitely one for those wishing to understand the mindset behind the establishment and growth of dystopian societies. I honestly believe the Master revealed much more about human nature than 90% of modern day dystopian fiction and to discover that it was technically a flop when i was released is heart wrenching.