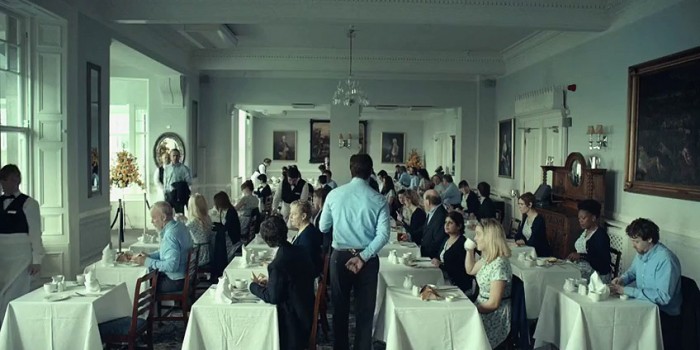 If you are familiar with the director Yorgos Lanthimos you may have seen the movie Dogtooth, which will definitely give you an idea of how disturbing and unconventional The Lobster is.

Set in the not-so-distant future, a dystopian city forces single people to check into ‘The Hotel’ where there are dances and talks to help individuals find a partner. If a partner is not found in forty-five days, the residents are turned into an animal of their choice. The main character played by Colin Farrell, David, chooses a lobster.

Incredibly European in tone, this twisted tale has a nauseatingly dark sense of humour and a feeling of suffocating oppression throughout that at times is almost too much to bear. Surreal, bizarre and laugh-out-loud funny, this is definitely one of the most refreshingly unique films I have seen in a long time.

Well, until the second half that is.

The Lobster is like watching two different films. The first part, set in The Hotel, is a  perfect dystopian comedy. It is full of fascinating characters and a wonderfully intense soundtrack. The second half however, set in the woodland, is slow and relatively uninteresting. There are some funny and intense moments, but overall it paled in comparison to the first half.

Having displayed such potential I felt overwhelmingly disappointed with this movie. It could have been the ultimate dystopian cinematic experience, but instead it descended into a anticlimactic love story that didn’t make sense…and also bored me to tears. I felt nothing for the characters by the end of it and was thoroughly irritated by Rachel Weisz’s character, an actress I usually adore.

Although I would wholeheartedly recommend The Lobster I would have to do so with a warning. You may feel deflated by the credits, but at the same time you will also have experienced some of the most powerful scenes in dystopian film.

So swings and roundabouts, I guess.