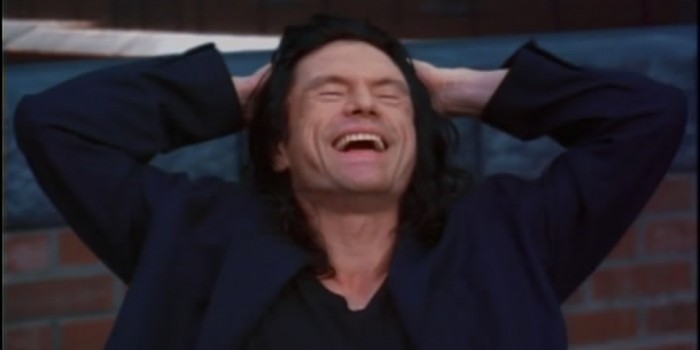 The Disaster Artist by Greg Sestero and Tom Bissell

Recognise these lines? If you do then you would have seen The Room, a film so bad that it’s good…in a bad way.

It is pointless to give a synopsis of this independently made “romantic drama” as it quite frankly is the workings of a madman; there are plot holes so big that there is more hole than plot, the script does not in any way resemble the English language and all of the actors are either bored, confused or simply untalented…but weirdly it works. It is not often that you find yourself laughing at a film yet The Room manages it, becoming the ultimate unintentional feelgood movie.

The writer, director and star is Tommy Wiseau, an inconceivably rich individual with an irritatingly undefinable accent. In The Room he is robotic, unemotional, peculiar-looking and creepy, but there is something about him that intrigues and entertains as he stutters through nonsensical dialogue in broken English. But how did this oddball get the means to make a film in the first place, and what were his motives for this ‘Citizen Kane of bad movies’? Why did no one stop this shambolic disasterpiece? And why on earth did anyone else want to get involved with it?

These questions and more are explored in The Disaster Artist, a making-of-cum-biography written by one of the stars, Greg Sestero. Sestero, who plays Mark, explains how he came to meet Wiseau and how The Room eventually managed to get made. He also tries to piece together information on his illusive friend and his unstoppable desire to be a movie star.

I thought the book was going to be an affectionate memoir about a ridiculous period in cinematic history, but instead it was a scathing look at Hollywood’s bitter, rotten underclass. Wiseau comes across as an arrogant, rude, spiteful individual who’s selfishness obliterates the self-esteem of anyone who’s foolish enough to work with him. Sestero is equally as unlikable as he openly uses Wiseau’s shortfalls to boost his own ego, venomously mocking him one minute and pitying him in a nauseating fashion the next. It seems that, even though unsuccessful himself, Sestero believes he is like Laurence Olivier playing a small part in Coronation Street.

Pretty much everything Sestero writes is questionable in its integrity. Is Wiseau a comic book villain who continuously delves into manic rages, or is he a mentally ill, sexually-abused, poverty-stricken man-child? The book really is as inconsistent as the film it dissects, asking a thousand more questions than it answers…and of course the answers that are provided tend to be annoyingly vague.

What the book proves is that money and fame will get you anywhere in today’s society. No talent? No problem. If you thrust enough cash at a creative industry for long enough you are sure to be embraced by it eventually. This book is obviously Sestero trying to make good of this blight on his résumé, but instead of coming away from it better off he is just fueling everything that is wrong with Hollywood.

So for me what was once a light, entertaining movie about nothing in particular now embodies everything that is repellent about the modern world. These days it’s all about who can shout the loudest, who can buy the most, who can look more of an ass. Of course it’s all very funny for five minutes, but where are we actually going with this? When can we stop praising those that can’t and start paying attention to those that can?

One thought on “The Disaster Artist Novel Review: No Talent? No Problem”