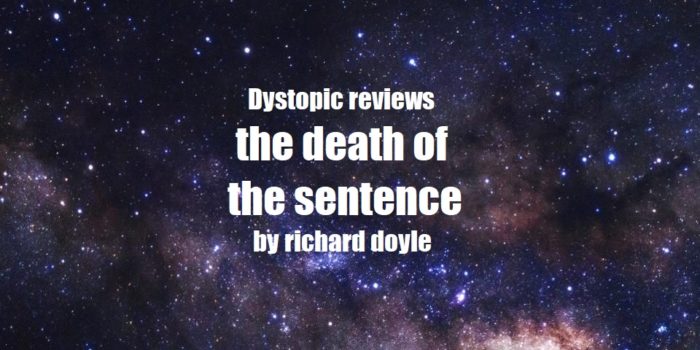 I have never reviewed poetry on Dystopic. I must admit, I feel slightly ill-equipped to do so – I don’t think I’ve written about a poem in a critical sense since university, and I graduated over a decade ago – but when Richard Doyle introduced me to his pamphlet of science and science fiction themed poetry, I was immediately intrigued. And with the compelling title The death of the sentence, I knew Doyle had to be the first poet to feature on my humble blog.

The pamphlet contains twenty poems, many of which are saturated in Doyle’s creative anguish. The arduous process of editing, the torment of writer’s block, the desperation for success, the sheer exhaustion of self-motivation – any creators reading this pamphlet will feel the palpable agony that comes off the page when Doyle writes about his struggles, particularly with, ‘The novel I could never write’.

The internal turmoil demonstrated within this particular poem is an all too familiar one for me, as he writes, ‘All I have is the germ of a concept. The merest speck.’ The torture of trying to squeeze more out of an idea that isn’t working is almost knowingly self-destructive, as is the inability to let go of it – even once you know it won’t go anywhere. The poem ends defeated and pained, ‘And so, inevitably, my thoughts start to tumble upon themselves.’ The memories of my own failed projects returned sharply when reading this, and although I felt comforted not to be alone in this pain, I was also reminded that I will put myself through this again. And again. And again. Oh, the joys of being a writer.

‘How to unwrite your novel’ is a reassuring, simple and rousing piece on the necessities of strict editing. The opening two lines, ‘Start with an opening sentence. Demolish it.’, were liberating to read, signifying the joy that can be had when you work up the courage to kill your darlings. Also, the inevitability of stomping on something you once believed was perfect is surprisingly cathartic. Pride has no place in editing.

Similarly, the final poem of the pamphlet, ‘The sentence falls into a black hole’ is a beautifully written piece about the destruction of words, and its first line gives the pamphlet its namesake, ‘I give you the death of the sentence, witness its falling, vanishing to the point of destruction.’ In his poems that are centred around the writing process, Doyle still weaves elements of science fiction into them, with lines such as, ‘dream of the sentence shining and collapsing into the maw of the black hole.’ I love the idea of imagination being represented with physicality as a star, it seems so fitting.

But there are also poems in the collection that are solely science fiction in theme. For instance, ‘Space Hum XVII’, which was a particular favourite of mine. It contained what I personally believe to be the best lines of the entire pamphlet:

‘untie the tangled light-
years, tremble as they fall
scatter dust behind you’.

‘Pushbike Passion’ is another captivating sci-fi piece, mesmerising for its minimalistic style and entrancing rhythm that reminded me of Hemingway. And of course ‘The Dystopia Factory’, a glorious piece on interstellar battlegrounds (and may I add, a title I wish I had created myself).

This thoughtful, delicate (and occasionally traumatising) pamphlet was deeply introspective yet wonderfully unintimidating for my first poetry review. Simple in style yet steeped in emotion, I recommend The death of the sentence for poetry newbs and aficionados alike. It was a little inconsistent thematically, and I found myself bouncing between certain poems when I reread it as the order didn’t quite flow for me, but it is definitely a collection I will be returning to. Really looking forward to seeing what Doyle writes next – whether he sets it in the stars or at the writing desk.

You can buy The death of the sentence now on many different platforms as an ebook. For updates on Richard Doyle’s future works, find him on Goodreads.

Richard Doyle is an old-school SF fan who began writing seriously in 2001. He has a Diploma in Creative Writing from the University of East Anglia and collaborated on a book in 2006. He has had poems published in the UK poetry magazines Orbis and Sarasvati and is a regular member of the Bristol Stanza Poetry Group.