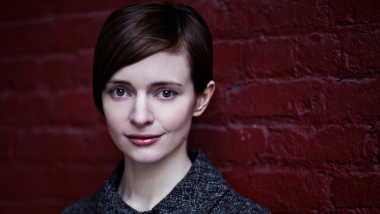 This novel has been recommended to me countless times. Reviewers online have been praising it to high heaven since its release. The premise is intriguing. The cover is beautiful.

So of course I was careful not to get too hyped up over Station Eleven for fear of any subsequent disappointment. I can honestly say I began this book with no expectations other than the fact that I ‘might’ enjoy it.

For her fourth novel, Mandel pictured the end of civility to be caused by a contagious virus. The Georgia Flu initially appears much like any other flu, but within hours its victims are deceased. The disease spreads far and wide, swamping the world so quickly no one has a chance to react. There are few survivors, and they are confronted with a world void of structure and stability.

The novel follows a varied array of characters, most notably Arthur, a famous (or infamous) actor, Elizabeth, ex-wife of Arthur, Kirsten, a child survivor of the pandemic, Jeevan, a journalist, and a Travelling Symphony that roam Canada post-outbreak to sing and play to the dwindling population.

The timelines of the characters all interweave in some manner, often subtly and seemingly without impact. The narrative jumps between time and character so that, by the end of the novel, the reader has a full grasp of the beginning, middle and end of the apocalypse.

I feel the word I must use with this novel is ‘ambitious’, although that seems condescending. There are a great many characters and important incidents that Mandel pieces together to create a complete and intricate timeline of events, but I often failed to see the significance in many of the connections.

The novel has an interesting slant on the post-apocalyptic genre (because it is not dystopian, despite the fact that everyone labels it as such). I loved the fact that it focussed so heavily on individual characters rather than the world in its entirety as, during that sort of event, everything would become so much smaller, inward and personal. Individual stories, motives and tragedies are far more intriguing than the science and feasibility of a natural disaster, and with so many characters the plot continually shifted and changed pace. In the past I have found novels such as The Road a slog rather than a perilous journey as it was focussed too closely on a particular character, so it is definitely more compelling to have a range of differing perspectives.

Having said that, I did not find many of Mandel’s characters particularly gripping. Many of them I actively disliked and some felt like mere carriers of the plot.

There was also a villain later on in the book, but I never really felt that he was a threat to the characters. Or perhaps I simply did not care enough about their fate? The issue with having so many characters and plot twists and turns is that nothing is fleshed out and given much detail, so although I was invested enough to finish the novel I felt somewhat apathetic by the end. A lot happened, but I didn’t feel I was immersed in it.

Despite trying so hard not to be, I was a little disappointed with Station Eleven. It had a great concept and, to use the horrible word I have before, incredibly ambitious, but it didn’t have the heart and soul I craved. I wanted to cry when characters died and cheer when they survived, but this didn’t have that for me.