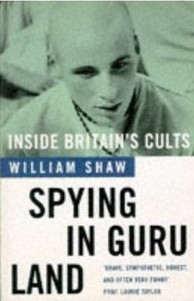 I’ve been a little obsessed with researching cults lately, and while looking through my local library for books on the subject I came across William Shaw’s Spying in Guru Land.

This book was intriguing for me, not only because it was based on cults in the UK but also because it was written in the early 1990s.The majority of infamous cult activity occurred in 1970s America, when the culture of peace and free love transformed into a pursuit of meaning, structure and security during an incredibly tumultuous time for the country. The political mood, coupled with the American drive to discover pioneering ways of living, led to a near pandemic of destructive groups that aimed to control and exploit its members.

Numerous tragedies surfaced during the American cult crisis – the People’s Temple, the Manson Family, the Branch Davidians and the Children of God were just a few groups responsible for horrendous crimes – but the UK was never really at the forefront of any major incidents. Either Spying in Guru Land was going to reveal a secret underground of cults to me, or it would simply detail a milder echo of craziness that the UK inherited from their cousins across the pond.

Shaw is an investigative journalist. At the beginning of the book he explains how he went undercover to join as many existing UK cults as he could in order to understand the mindset of members within such organisations. On the one hand he must have been incredibly cocky to believe he wouldn’t be affected by any attempts at mind control from these groups, but on the other hand he was clearly curious to see if they could, how they would do it.

Some of the cults that Shaw joined included the Emin, the Jesus Army and the Economic Scientists. As predicted these groups did not have the same level of power as the infamous cults of the 1970s, and its members were predominantly lost, damaged and vulnerable individuals, but there was still a surprising amount of power had by these groups. Most of the groups investigated are still in existence today and have a relatively high level of funding and social standing, probably because they were rebranded as self help groups and movements around the time of Shaw’s investigation.

I expected the groups to be portrayed as sinister or harmful, but Shaw wrote about them with a lot of pity, sadness and often fondness. Whether this was because he was brainwashed into feeling sympathetic towards the plights of these groups, I don’t know, but a lot of the time he felt sorry for the members and described the leaders as if they were unpopular teachers; he mocked their authority, but nonetheless took their power as an inevitability.

Spying in Guru Land was simultaneously disappointing and eye-opening. I never knew so many cults existed in the UK, but many of them were mild and harmless or seemed to target those who wanted to be targeted. Shaw is frustrated as the members often know they are being exploited, but their situation prior to the cult was often so bad that they saw no better alternative. The cults may have taken their money, filled them with lies and got them to carry out manual labour for free, but when you’ve experienced homelessness, drug abuse, mental illness and loneliness, sometimes anything is better than nothing.

I must say that after reading this book, joining a cult no longer seems like such a crazy leap. If you’ve been systematically let down and failed by the government, your family and your friends, why wouldn’t you accept help from a group of people that tell you they like you and want you to join them? What if they make you feel like you fit in for the first time in your life? Would you really push that away to go back to being alone? Perhaps the result of Brexit and the failings of the Tory party will be the second coming of the cult crisis, UK edition.