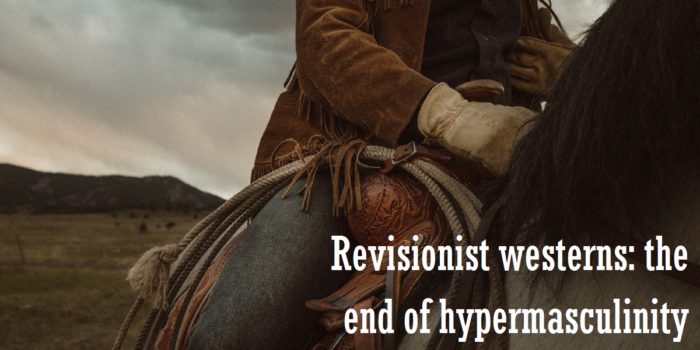 I used to think anything set in the wild west was boring, misogynistic and offensively dusty. Dumb car chase movies for people who like horses.

And to a certain degree, I still think this is true. Most of the old cheap paperbacks and classic wild west movies are a glorification of a time and place in history that was actually incredibly grim. I have never understood the adoration for fiction that depicts suffering and violence in a positive light.

But there is something undeniably enthralling about the wild west. You have ghost-like legends on horses with guns, defying the law, drinking and womanizing, seemingly untouchable. They grumble and spit and wear cool hats. And they’re so pumped full of testosterone that even the likes of Stallone and Schwarzenegger would feel emasculated in their presence (apologies, I believe my understanding of what a stereotypical ‘man’s man’ is might be outdated by a few decades).

Classic western stories are also reliably entertaining in their structure. The push and pull of good versus evil, culminating in a big showdown gunfight at the end…I mean, what’s more exciting than that? And there’s often an interesting commentary on the disparity between the rich and poor, with the hard-done-by farmers suffering in poverty while the landowners and corrupt sheriffs lavish in unimaginable riches. Of course, there are also the stories featuring cowboys and Indians, which are abhorrent and inaccurate from almost every possible angle, yet in storytelling terms provide an easily identifiable enemy that again is entertaining.

So while I definitely see the appeal, I’m personally not interested in the sort of westerns that feature lovable rebels or brave sheriffs. For me, the most exciting variation of this genre is ‘the revisionist western’.

A revisionist western is a story that has revised the classic interpretation and romanticised view of the wild west and turned it on its head. Many are set near the end of the wild west era to demonstrate how outdated the lifestyle is.

I first came across this gritty and unromantic portrayal of the wild west when playing Red Dead Redemption. This beautiful video game shows how difficult it was for cowboys to evolve from rulers of the dusty plains with their horses and guns and lassoes, to a paved world divided into towns that are filled with cars and technology. People were becoming smarter, more connected, less in need of ranch hands and gunslingers and ruffians. The world was growing simultaneously larger and smaller for cowboys, and they struggled to see their place within it. Brute strength, the only currency they were used to dealing in, began to lose its value.

This deviation from a genre captivated by cruelty and masculinity into one questioning the validity and worth of such a way of life is so thematically rich. We see male characters who were once respected and celebrated for the murders they’ve committed start to be pitied by people. The glorification of their violence turns into fear and disgust.

One of the most fascinating examples of a revisionist western is Brokeback Mountain. One character is a rodeo star and the other a ranch hand. Neither man enjoys their way of life, but neither man knows how else to be. They both feel like they’re falling behind in a world that is changing fast, yet they never belonged to the old world in the first place. Their love for one another and their inability to be happy and free in this love only cements the idea that hypermasculinity is unattainable, and not something to be admired or sought after.

Another great piece of revisionist western fiction is Butcher’s Crossing by John Williams. It’s about an educated, affluent and naïve academic who wants to put together a group of men to go buffalo hunting. He feels the need to experience hunting and living in nature to understand what it means to be a ‘real man’ before completing his studies and entering civilized society. As you can imagine, the harsh realities of a buffalo hunt is not what he had imagined, despite the many warnings given to him by men already living this way of life and do not enjoy it. He begins to understand the difference between masculinity and cruelty, and pays a big price for this lesson.

The final example of the revisionist western that I want to mention is The Power of the Dog – both the book by Thomas Savage and the recently Oscar-winning movie of the same title, directed by Jane Campion. This is an incredibly poignant story on the constraints of overt masculinity and the failings of a society in which no one is happy living by its patriarchal rules. I feel overviewing the plot in a few sentences simply wouldn’t do this impeccable character study any justice, but it is essentially about two brothers who are ranch owners. When one of them decides to get married, the other tries everything he can to split the couple up. The consequence is a battle of wills that explores the themes of masculinity, physical and intellectual intelligence, bravery, power and violence (yep, knew I wouldn’t do it an ounce of justice).

I hope you enjoyed my little ramble about the wild west. If you would like a soundtrack to go alongside your exploration of this genre, feel free to borrow mine from Spotify. And if you have any book or movie suggestions, I’d love to hear them in the comments below.