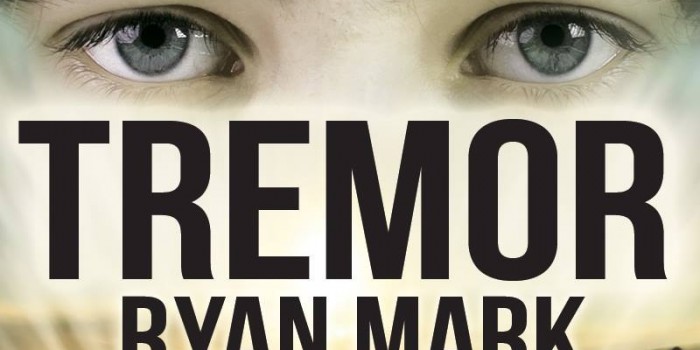 Today is the launch of Tremor, the debut novel and first book in the Tremor Cycle series by Ryan Mark.

It takes place in a world ravaged by the Fossil War. All governments have become defunct and complete control lies with Terrafall, a seemingly honest company…but will they help rid the world of the tremors like they’ve promised?

William wonders about the honorable intentions of Terrafall and whether society can really trust them to save the human race. As the world slowly falls apart around him and all those he loves seem to disappear, what does he really have left that’s worth fighting for? How far will he go to salvage the remnants of his bleak existence?

Britain’s Next Bestseller have been kind enough to provide an extract of the novel that you can read below.

Tremor is available on Amazon and you can purchase it now by clicking here.

She knows they haven’t got long. She looks across the frozen ocean, shuddering as the ground beneath rumbles. She turns and faces the island, chosen because of its location, the harshest place on Earth and the furthest from civilisation, where they couldn’t be influenced orfound. Their mission had always been temporary, yet this place feels like home now.

Home. She hasn’t seen it for years.

Her heavy boots crunch through lichens that cling to icy surfaces, the cold biting hard. The lab bunker appears soon enough, built into the side of the volcano that dominates the island. Light from the narrow windows shimmers through the segmented rocks, illuminating her path.

‘Ready?’ her partner says, as she enters the sterilised entrance corridor. His dark brown eyes send a flash of encouragement in her direction, and a reassuring smile emerges through his beard.

As she smiles back she notices for the first time that his beard and indeed his hair are flecked with grey. We really have been here too long, she thinks, hanging up her windproof coat.

‘Ready,’ she says, her cheery voice presenting a façade of confidence as she turns back to face him.

‘I have to do this, no matter what,’ her thoughts silently converse with her fear. Damn, it’s been a long journey. Plucked straight from college, she’d been chosen because of her skills as a scientist. Were those exemplary grades a curse or a blessing? Both, she decides.

Oil has always been valuable, a source of control. Her father told her on several occasions that it had caused most of the recent major conflicts, and he held a firm belief that once the last oil reserve was depleted a devastating war would consume the planet. Uncharacteristically, she clenches her fists. That moment is almost upon them, that devastation about to be unleashed, and they were the ones responsible for finding more oil to prevent catastrophe, searching in the wilderness of Antarctica.

Humanity drained the Earth, and now, in desperation, the authorities have turned to a place that is supposedly protected by treaties. But treaties don’t matter anymore; just words on paper. They are insignificant in light of the alternative.

Her hands feel as though they’re burning, itching from the power within them. She’s lost ten years doing this, and as she rubs her cold fingers, she hopes it’ll all be worth it, that it’ll prevent war.

‘We’ve got two hours before the volcano erupts and the helicopter lifts off,’ he says. ‘The rest of the team have left, so it’s all down to us.’ He passes her a protective overall.

Stepping into it before retying her hair into its customary ponytail, she says, ‘I still can’t believe how much there is down there.’

‘This oil is the lifeline we needed. It’ll give us time to create a reliable replacement. Imagine where we’d be if it didn’t exist?’ Moving to the rear of the small room, he types a code into a secure door.

Although she trusts and respects him as a scientist, something inside her doubts whether the huge quantity of oil gurgling beneath them will last until a reliable replacement is created. The world can no longer be reliant on fossil fuels. This is the last oil source, the very last. Once it’s gone, it’s gone. Something has to change, and perhaps today will be the start of that.

‘Coming?’ Her partner has gone on ahead and she quickly steps into the secure room after him.

‘I’ll go and key in the transfer code. Should take about twenty minutes for the oil to flow,’ he says, heading over to a control panel. ‘I still can’t believe we pulled this off. Fifty pipes drilled into the last reserve in the coldest place on the planet. Unbelievable.’

‘It really is a miracle.’ She gently touches her stomach. Not the only miracle. ‘Right, let’s get on.’ She focuses. ‘I’ll set up the rig and begin the transfer. I can’t believe this is nearly over. We can finally go home…’

He nods, his relief marked with a tender smile.

Suddenly, the bunker shakes, the fluorescent lights blink. The sound of a thousand rocks crashing into steel vibrates throughout the room. She falls back, but he catches her. An alarm begins to wail.

‘Check the transfer!’ she screams, stabilising herself.

He rushes back to his position.

Silence. She looks at him. His face and body are motionless at the controls. ‘What’s happened?’ she breathes.

‘The pipes have been severed,’ he says. ‘The oil’s escaping…’

‘No, they can’t be. All of them? What about the safety net?’

‘Then we have to recall the team. We’ve worked too hard to let this fail.’

‘We can’t, it’s too late.’ He presses a red button and the control panel shuts off. ‘We’ve got to get out of here. I think the volcano’s erupting… Our readings must have been completely wrong.’

‘I don’t understand how, after all our planning, all that work. God, I feel sick!’ She runs across the room, lands on her knees and empties the contents of her stomach into a bin. ‘Come on, we’ll work something out. If we stay here a moment longer we’re dead.’

He reaches for her and she wipes her mouth, grabs his hand and smiles. ‘I love you…’ she whispers, gripping hard.

Before they can take another step, the island explodes in a ferocious roar of fire, rock and thick black smoke.

The entire land mass disappears, melting into the bubbling cauldron of the ocean, and all that remains of what once was is an oil slick stretching far across the water.

Beep, Beep, Beep. The sound pierces deep and it’s the only clear thing she can focus on. Her eyes flicker.

‘How the hell did she survive?’ a voice crackles near her ears.

‘The secure room she was in, must’ve been built for that kind of disaster.’

‘Not sure. If it weren’t for the scientist who was with her, she would have died. He shielded her, poor guy.’

She feels the pain burn through every limb, not from the wounds, but from the love she has for him and their unborn child.

The pain wraps its emotionless, agonising tentacles around her.

The people who’d ordered her to that place would pay.

They would pay with blood. Her eyes flicker again.