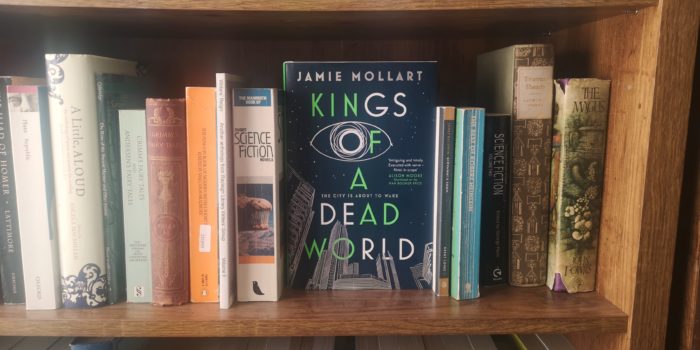 Kings of a Dead World by Jamie Mollart

I took a break from reading dystopian fiction for a while (living in an actual dystopia put a bit of a damper on the genre for me) but my god, it’s good to be back. And what better novel to return with than Kings of a Dead World by Jamie Mollart.

Kings of a Dead World is set in a very probable and very near future in which resources are depleting and the planet is rapidly dying due to global warming. The solution? Put the general public to Sleep in a drug-induced coma on a three-monthly cycle, allowing them to Wake for a month to live their lives before putting them back to Sleep again for another three. This means the amount of energy and resources used is reduced by a hell of a lot, giving the planet a chance to recover from the sheer torture our species has put it through over hundreds and thousands of years.

While most people are Asleep, one person remains Awake in each city: the Janitor. They are tasked with trading resources so that when the Sleepers are Awake, there is enough food and energy in the city for them to survive for four weeks.

The novel is written in three story strands from two perspectives. We mainly follow Ben, a citizen struggling to cope with his wife, Rose, who is suffering from some form of dementia, whilst he simultaneously navigates a discontented life in a discontented and increasingly violent city. We also follow Ben’s flashbacks to a time before Sleeping was introduced, a time in which he rebelled against the government and fought for freedom – but failed.

The other character we follow is Peruzzi, the Janitor looking after the city Ben lives in. Peruzzi is completely separated from society, living in a luxurious high-rise building watching over the proles. He lives a somewhat Patrick Bateman existence, with a strict and almost sociopathic control over every aspect of his life. Peruzzi also reminded me a bit of Oscar Isaac’s character in Ex Machina, as he has a similarly strange relationship with his robot companion who probably knows far more than she’s letting on.

What I loved about Kings of a Dead World was that it provided a complex solution to an equally complex problem. If human beings can’t be trusted to keep the world going, shouldn’t our liberty be taken away for our own good? But then again, can you ever be truly alive without freedom?

There was a quote near the beginning of the novel that set the overarching theme really succinctly for me:

‘Like frogs in water slowly brought to the boil, we all assumed we wouldn’t be the ones alive when it happened. No-one thinks they will live to see the end of the world. But someone has to, so why shouldn’t it have been us?’

Ultimately no one thinks they’ll be alive to see the consequences of generations of mistakes, nor do they want to have to sacrifice their comfort and freedom to rectify them, but the end is nigh (both in reality and in the novel). This isn’t an issue that we can’t start to consider in ten, five, or even two years’ time – the time to act is now.

What I found most enviable about Kings of a Dead World from a writer’s perspective is how the Mollart flitted between differing perspectives and timelines to create a complete story arc that was both suspenseful and intriguing, and somehow manipulated each strand to feed into another seamlessly.

Of all the plot strands, I was most fascinated by Peruzzi’s. I found the slow transformation of his behaviour really compelling as he shifted from someone who figuratively and literally looked down on Sleepers, to someone realising they are just trapped, just as ‘asleep’.

While I enjoyed the progression of Peruzzi’s character and the disparity between Ben as a young rebel and Ben as an older man caring for his wife, I wasn’t quite as enamoured with the Sleepers. They were often portrayed as violent, mindless and frightening – basically, I found it difficult to understand if I was supposed to root for human beings or not. I didn’t want them to have their freedom. Then again, that is the whole point of the novel. Do we want the monsters who are ruining our planet to continue doing that? Is true freedom worth starving for? Perhaps it says more of me than it does of the novel, but I enjoyed Peruzzi’s cold and logical approach. But would I be willing to give up my freedom, or do I see myself as Peruzzi, exempt and above all that?

Another aspect of the novel that I found difficult to enjoy were the god-like entities – Chronos, Bacchus and Rip Van. Like the love of Big Brother in Nineteen Eighty-Four, the trio are used to paper over the cracks of a dysfunctional society. However, whenever they were referenced, either in conversation or as part of the plot, I found they completely pulled me out of the world. I didn’t fully believe their ability to pacify a society that appreciates the scientific reasonings of their situation. Also, religions take hundreds of years to establish to this scale, and this was just a jump too far for me in terms of the realms of societal control.

But this novel is an incredible ride, and it couldn’t have been published at a more perfect time. It made me see the pandemic in a whole different light – how quickly humans can adjust to change, but also how fervently we can push against it. I see this being a very firm favourite for dystopian and sci-fi fans. Also, if you’re a collector of beautiful covers, Kings of a Dead World needs to be featured prominently on your bookshelf.