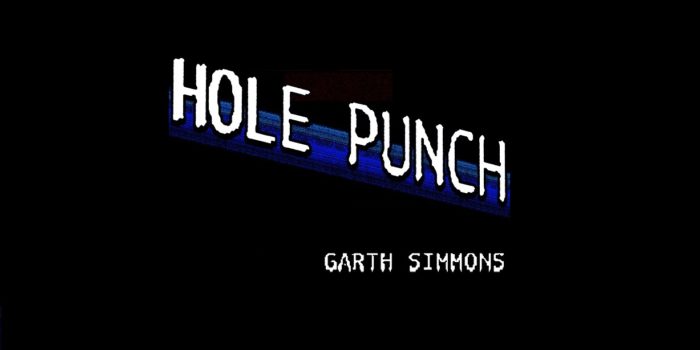 If you’re looking for a raw, fragmented, nightmarish collection of stories that makes you feel simultaneously bewildered, scared, disgusted, amused and angry all at once, boy oh boy do I have a book for you.

I’ll get to reviewing Garth Simmons’ Hole Punch in a minute, but before I do I must ask that you take a gander at his artwork first. Once you’ve seen the ferocity of his visual work, his fiction will begin to make a bit more sense – as in, you’ll start to understand the disjointed world in which you’ll be entering, but making sense of it is another matter entirely.

While Hole Punch has been categorised as a novel, or a collection of short stories that form a larger narrative, I would probably be more inclined to describe it as a collection of poems. Much like his art style, Simmons’ words are a provocative attack on the senses, and while I felt I enjoyed the characters I encountered and the situations they found themselves in, I had no idea where any of it started or ended – or if it even did start or end. The whole experience was so dreamlike that I could only sit back and experience each page for what it was before moving on to the next.

Normally in my fiction reviews I like to spend some time providing a quick overview of the plot, but I feel ill-equipped to do that here. I think I would even find it difficult to describe the genre; there are elements of science fiction, horror and an odd, quirky sense of humour that faintly reminded me of Bret Easton Ellis and Hunter S. Thompson, but other than that I’m stumped.

I suppose ultimately this book is a glimpse inside Simmons’ head, and I’ve always felt that if anyone ever gained the ability to read minds, nothing they’d hear would ever be linear or easily decipherable. It would be a mish-mash of emotions and abstract ideas and unrelated memories that would take time to work out. And so, while Simmons’ work is new to me and I can’t fully understand his thoughts yet, I can definitely tell you from reading Hole Punch that he feels like an outsider. This was a strong theme that ran throughout the majority of his stories, as was a raw maleness and sense of isolation, which again was remnant of Thompson and Ellis.

I don’t know what sort of journey Hole Punch took me on, and to be honest I still can’t work out whether it was entirely made for me or not. But I know it was uniquely intangible, and it truly made me feel. Somehow Simmons has translated his art into words, and that alone is pretty damn impressive.

Hole Punch will be released on 12th October by BNBS Books.

Garth Simmons was born in 1981 in Doncaster, South Yorkshire, UK in 1981. He’s a visual artist who’s made paintings, installations, animations and pattern designs. He has had exhibits everywhere from Scarborough to Los Angeles. His pattern designs were in the Golden Globes and Fashion Times and he likes to remind people of this. Writing has always been a feature of his artwork. He would write directly onto his artwork, or by collaging “stream of consciousness” notes.

In 2015, whilst working in a data entry position for Siemens, he began writing short stories as Facebook posts. At first they were daydreams of outrageous acts he could commit whilst at work (if he were professionally or ethically allowed). Later they were stories in other settings. Some dark memoirs of times in various school settings and learning programmes (for those who are “not on the right level”).

These stories resonated with his social media followers. He was encouraged to put them into a collection and seek out publication. While putting these stories into a contextual order he realised they formed a larger narrative. A tapestry of recurring themes, settings and characters. They made up a larger biographical webwork and subjective statement on the world. A hole punched through this fabric, hence the title Hole Punch.

Since completing Hole Punch, he has been working on three long-form novels. Also he has an actual short story collection comprised of several 10’000 word stories. He also does a podcast called Slanderhour and has an EP in the works. His philosophy is that “the more things you make, the more you enjoy your own company”.