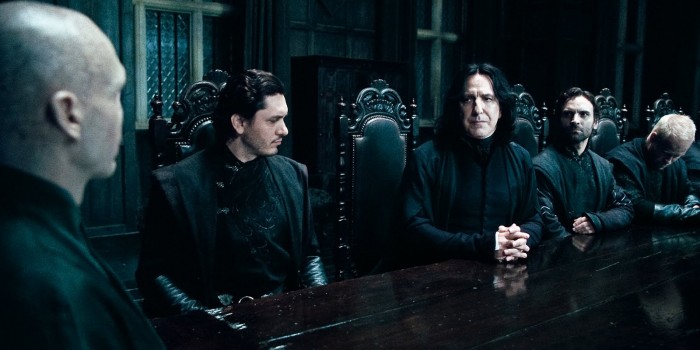 A lot of people disregard the Harry Potter series because of its young target audience and widespread popularity, but there is more to the books than its depiction of puberty and the numerous sites dedicated to Potter-based homo-erotic fan fiction. The novels are full of political conflicts that mirror humanity’s problematic history and also highlight an array of social biases that are still prevalent in western culture today. For example…

Class and wealth. Even from the very start of the series we are confronted with the ideals of suburbia and the stark differences between living in a ‘show home’ to living in a humble, more loving home. We then discover that Harry has been left a substantial inheritance and this later affects his relationship with Ron, a boy from a less privileged background. Ron’s family could be described as working class and the shame he feels about this is brought up on several occasions.

Nazism. There are many parallels to Nazism within the novels. For instance the Death Eaters are almost like the Gestapo, taking their orders from Voldermort and acting out their own warped sense of justice as Hitler had instructed his secret police to do. They torture for information, intimidate, spy and murder – all while wearing a very structured, dark uniform. They have a very clear goal: to rid the wizarding world of a certain type of people, and they go about this with a demented fervor that can only have been inspired by the Nazis unrelenting hatred of the Jews.

Hitler Youth. Similarly to the above point, the use of children in Voldermort’s cause could be likened to the use of children in Hitler’s cause. Draco Malfoy helps his father by gathering information on Hogwarts and, although at first the boy is eager to please and spy on Harry and his friends, his conscience gets the better of him as he realises he is helping to bring about their deaths. Many children who were part of the Hitler Youth were later horrified by what they were involved in, as can be seen in the interview below with Hilmar Von Campe, a former Hitler Youth member.

Anti-government. In the Ministry of Magic a great deal of its employees seem to be corrupt. A lot of the ministers are aligned with Lord Voldermort and spy on those they are supposed to protect, even working at Hogwarts in order to watch and control Harry and the other children. Although not everyone within the ministry is so villainous Rowling seems to be suggesting that governmental bodies are not necessarily trustworthy and, even if there are people within it that are genuinely political for the good of the citizens, they are heavily outnumbered and ineffectual. I personally believe this is very similar to our own government, which is highly unethical and undemocratic and is designed so that anyone who tries to change matters can be swiftly removed from power.