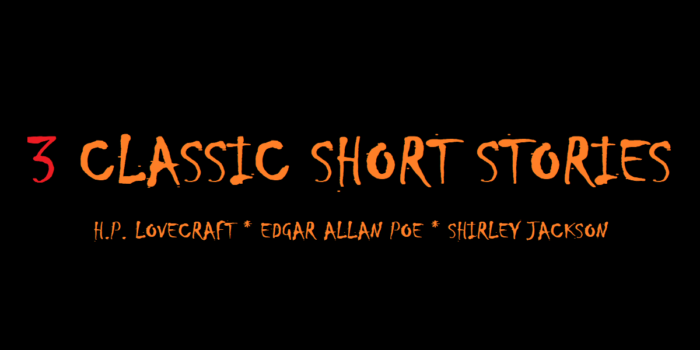 This year I decided to delve into some classic short stories by some of the best-known horror writers, partly because I’ve not read much of them before, and partly because I’m also doing a horror movie challenge that’s taking up a lot of time (which you’ll see on Dystopic on All Hallows’ Eve). Basically, I didn’t want anything too long*.

If you have any horror short story recommendations for me, please let me know in the comments below – I’m a n00b in the world of short fiction, aside from Bradbury. I’d also really like to read more contemporary horror novels if you know of any.

* Obviously, I decided to read ‘The Dunwich Horror’ before actually looking up its eye-wateringly long word count.

The Dunwich Horror by H.P. Lovecraft

You can say many, many disparaging things about Lovecraft, both as a writer and as a human being, but my god this man could paint a gloomy, atmospheric picture.

‘The Dunwich Horror’ is set, funnily enough, in the fictional village of Dunwich. In this weird, creepy, backwards place in the arse end of nowhere, there is an old man named Old Whateley living with his deformed albino daughter, Lavinia, in a rundown shack of a house. One day Lavinia mysteriously gives birth to a son, father unknown, and names him Wilbur. But Wilbur isn’t just a little innocent baby born out of wedlock. Far from it. Wilbur is growing at a disturbing rate, is disturbingly advanced for his age, and has an even more disturbing goal in life…

When it comes to Dunwich as a setting, you can’t fault Lovecraft’s writing. I felt as though I were actually trudging through the village, a sick feeling asserting itself in my stomach as I realised I was going through a place I most certainly didn’t want to be in alone. Dunwich was my favourite character of the story, with its unsavoury reputation and occupants reminding me of a real-life town (or two) I’ve also regretted entering. Some places just don’t feel right, as if they actively encourage evil.

But after a few pages I was just regretfully trudging through the story itself, with its paragraphs upon paragraphs of endless description and back story. Perhaps it would have been creepier and more entertaining had it been read aloud to me, or perhaps I have a short attention span thanks to our culture of immediacy, but in all honesty I was a bit bored by it all. There was nothing that truly gripped me, and while the ending was snappy and satisfying, it would have been much more effective had it happened a few pages earlier.

If you love reams of dark, foreboding description and aren’t too bothered by plot or pacing, ‘The Dunwich Horror’ will be like sinking into a nice warm bath for you – albeit a rather sinister bath. But personally I found this story to be rushed in the parts I wanted to be more drawn out, and drawn out in the parts I wished were rushed.

The Cask of Amontillado by Edgar Allan Poe

From a long short story to a short short story, Edgar Allan Poe’s ‘The Cask of Amontillado’ has to be one of the quickest reads I’ve ever come across.

The story is narrated by Montresor, a man set on seeking revenge against a fellow nobleman, Fortunato. Fortunato has insulted Montresor in a way that’s so unforgivable he has decided he has to kill him – although what Fortunato has actually done is not specified at all in the story. During a carnival, while Fortunato is drunk and dressed up as a jester, Montresor lures him into a deep, dark wine cellar by promising him a taste of a rare vintage of Amontillado. But will he actually go through with killing him? And how does he plan to do it?

While I found ‘The Dunwich Horror’ to be a little too long, I actually thought ‘The Cask of Amontillado’ was a little too short. I wasn’t sure of its aim, really – it felt like a writing exercise, or a potentially believable method of murder, and while I wasn’t wholly invested in the story or the characters, I did find myself enjoying it because I was in the hands of a competent writer. It was like eating a cheese sandwich made by a Michelin star chef – it was a mere snack, and it was the best it could have been with the ingredients at hand, but I know he’s capable of better.

‘The Cask of Amontillado’ is worth a read, particularly as it shows the almost comical pettiness of someone desperate to heal their wounded pride. Plus, it’ll take you all of five minutes, so why not? But there are definitely better Poe stories to be read.

A Visit by Shirley Jackson

I’m a big fan of Shirley Jackson – both her novels and her short stories – so I knew I wanted to include something from her in this year’s Halloween challenge.

‘A Visit’, or ‘The Lovely House’ as its also known, follows a young girl named Margaret who is staying with her friend Carla at Carla’s parents’ house for the summer. The house is a huge, beautiful mansion with a tower, and Margaret is instantly enthralled by it, yet Carla is a little dismissive and insists that the house will be much livelier once her brother arrives.

When he does eventually come home, he brings with him a friend. However, rather than bringing life to the house, the two men, Paul and the Captain, bring a weird energy instead – Carla starts acting strangely whenever Margaret speaks with Paul alone, and the Captain is a little standoffish. Margaret also asks Paul about the tower as she is desperate to see inside of it, and he tells her of an elderly, mysterious relative who lives in it. He then suggests that she pay the old woman a visit…

Like I said, I’m a big fan of Shirley Jackson. I love her writing style and the way she writes women. They’re often victims of circumstance yet retain a level of intuitiveness, intelligence and dignity that some male writers fail to show in such characters. And it’s because of her brilliant characterisation that I enjoyed the overall flow of ‘A Visit’, the way Jackson slowly introduces Margaret and Carla, showing them initially as quite similar before adding levels of complexity until they’re almost from completely different worlds. The way she reveals the house is also captivating; at first we only see its grandness and unique beauty, but as we edge closer we start to see that it’s greatly in need of repair.

While I certainly enjoyed the journey, the ending of ‘A Visit’ was immensely confusing and abrupt, to the extent that I reread the last few pages to make sure I hadn’t missed anything. Eventually I looked it up online (yes, I’m now one of those people who Google ‘the ending explained’) and came to the conclusion that, while the idea was relatively intriguing, it wasn’t strong enough to support the build-up that preceded it. The ending was vague and open, while the rest of the story was very matter of fact. I can’t say that I didn’t enjoy it, but I do feel cheated.

If you haven’t read any of her other works, ‘A Visit’ is a really good taster into Shirley Jackson’s style – but her more famous short story, ‘The Lottery’ is definitely more accomplished and satisfying.