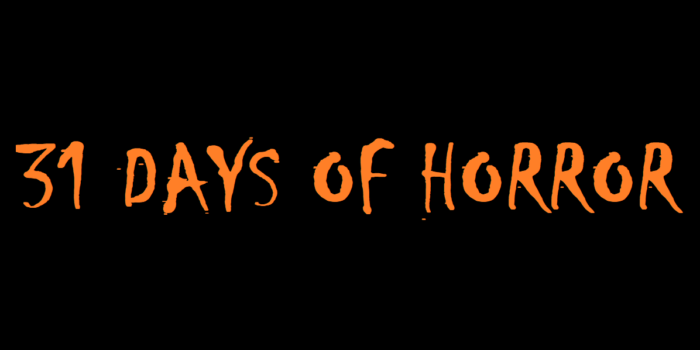 This year, I set myself the rather ambitious task of watching some form of horror every single day in October, and then writing 31-word reviews of them all.

I’m not going to lie, it was a bit of a struggle at times. Some days I found it difficult to choose something to watch, and other days I struggled to stay awake long enough to reach the credits – I am in my thirties after all. Watching a movie every day was a huge time drain as well, especially as I have a full-time job and a flat full of animals to care for.

But I made it. Aside from the bizarre Paranormal Activity marathon I had for six days in a row, I think I watched a good range of films – old and new, unseen and rewatched (by the way, all movies with an asterisk next to them I’ve seen before).

The rating system is as out of five, and is classified as follows:

I hope you enjoy this marathon of a challenge. And as England is on the brink of lockdown once again, maybe I’ll try and do something similar in November…

Day 1
Final Destination *
2/5
Tonally all over the place, with the teenagers more interested in death theories than mourning their friends. Great premise, clumsy execution. Although I did enjoy this nostalgic trip down memory lane.

Day 2
Final Destination 2 *
3/5
A gross and enjoyable sequel. The connection to the previous movie was tenuous. Characters were two-dimensional and annoying, but that’s a good thing when you know they’re about to get slaughtered.

Day 3
The Lighthouse *
5/5
This was my second viewing and it definitely won’t be my last. Not exactly a horror, but certainly horrifying. It’s beautifully shot with rich dialogue, amazing acting and many, many farts.

Day 4
The Taking of Deborah Logan
3/5
Had a lot of potential but didn’t deliver. Cheap horror tropes forced into moments that didn’t need it. Good acting, but the script let the performances down. Ending was gruesome though.

Day 5
Devil
1/5
80 minutes have never felt so long. This movie probably started with someone wanting a horror in a lift, and they cobbled together the flimsiest, dullest plot imaginable. Day five wasted.

Day 6
Wishmaster
4/5
What great fun! A simple premise with lots of gore. Yes, the acting was not exactly Oscar-worthy, and some of the CGI was questionable, but this felt like a passion project.

Day 7
Rosemary’s Baby *
5/5
One of my favourite horror movies. Love how the creepiness slowly builds and Rosemary’s reactions are so believable. Felt even more poignant as I’m trying to move home at the moment…

Day 8
Black Box
2/5
Surprised this has had so much acclaim. Made no sense, felt no peril and was quite boring. What made it even more disappointing was that there were so many missed opportunities.

Day 9
Jennifer’s Body
2/5
Another disappointment. Watched this as my partner found a few articles saying there’s more to it than you might think. They’re all wrong. Quite lifeless. Occasional funny moments, but mostly boring.

Day 10
Misery *
4/5
An absolute classic for a reason. I only need to say three words: the ankle part. Even though I knew what happened I was panicking throughout, desperately wanting Paul to escape.

Day 11
American Murder: The Family Next Door (Netflix documentary)
3/5
An unsettling documentary. Made me realise how easily I’d be taken in by good looks and politeness. Everyone thinks they can pick a psychopath out of a line-up, but probably couldn’t.

Day 12
American Werewolf in London *
5/5
So funny and gruesome, with a surprisingly bleak ending. The only memory I had of watching this as a teen was seeing a naked man running, which says a lot really.

Day 13
Get Out *
5/5
The future of horror. I wouldn’t call it faultless, but it’s not far off – great characters, horrifying premise, amazing actors. It had something to say and knew how to say it.

Day 14
Daniel Isn’t Real
3/5
Enjoyable indie starring the children of famous actors (obviously I had to Google them during the movie). Nice designs and ideas, but felt like it was made by students. Unintentionally other-worldly.

Day 15
Paranormal Activity *
2/5
Didn’t remember this being so slow-paced when I watched it before, but still enjoyable. The acting and dialogue was so realistic – can’t think of another movie that’s done that as well.

Day 16
Paranormal Activity 2 *
3/5
Much better movie than the first one. More happened, and the dog and little kid added to the jeopardy. I liked how it tied into the first movie at the end.

Day 17
Paranormal Activity 3
3/5
Probably the best movie of the franchise. Very creepy, although the reason for the found footage aspect of it wasn’t as believable as the first two. I liked the family dynamic.

Day 18
Paranormal Activity 4
2/5
Oh dear. Although the kid was creepy, the characters, reason for the found footage and tie-in to the other movies was so bad it was almost laughable. Watchable, but only just.

Day 19
Paranormal Activity: The Marked Ones
1/5
Just awful. Turned into an odd comic book movie at one point. Absolute nonsense, jumps the shark, and all in all unenjoyable. The use of racist stereotypes made me very uncomfortable.

Day 20
Paranormal Activity: The Ghost Dimension
1/5
Why did I do this to myself? Felt like no one could be bothered with this one, cast or crew. Didn’t know whether to laugh or cry most of the time.

Day 21
The Haunting of Bly Manor – episodes 1, 2 and 3 (Netflix show)
2/5
Everything is just perfectly splendid! Jokes. Intrigued, but also irritated. Dialogue is very odd, accents are insane, and why is some woman telling this excruciatingly long story at a rehearsal dinner?

Day 22
Nocturne
3/5
I had a good time with this. If you’ve ever experienced sibling rivalry or have had to justify creative pursuits, you’ll like this. Very Black Swan, but not quite as good.

Day 23
The Stuff
1/5
Weird little b-movie. The plot didn’t connect at all. I couldn’t tell if it was satire or just a terrible movie. Went straight to the charity shop because it’s insanely racist.

Day 24
Attack the Block
3/5
So much heart to this movie, and the character development was really well done. Loved the alien design and the authenticity. Find it weird that an upper-class white man made it.

Day 25
Doctor Sleep
4/5
Very surprised I liked this so much. Pacing never dropped. The epic finale was a disappointment as it ended so quickly – but it’s all about the journey, not the destination, right?

Day 26
Dead Ringers
3/5
I’ve been finding it difficult to describe what actually happened in this movie, but I enjoyed the vibe and the aesthetic. If you want to feel unsettled and violated, watch this.

Day 27
The Lie
1/5
Boring. Made zero sense. The characters constantly made huge mistakes and contradicted themselves. Thin, lazy storytelling. The ending was so infuriating I shouted at the television. Basically, don’t bother with it.

Day 28
The Double
3/5
This movie was an error in judgement. It was more about the horrors of existential dread than an outright horror movie. It was quirky and suitably Russian, but not entirely satisfying.

Day 29
Frailty
4/5
Great performance from McConaughey, back when he had something to prove. A little dated and televisual, but compelling throughout. Couldn’t tell the director’s intention, which was really refreshing. Loved the twist.

Day 30
Little Hope (video game)
4/5
Weird facial expressions and body movements aside, this is fun to play with friends. Just enough interaction to feel part of the story, but easy enough to drink beer while playing.

Day 31
Relic
4/5
It was intriguing, but lacked something – clarity, maybe. I think a few things needed to be spelt out a little clearer. Want to watch it again. Emily Mortimer’s accent was impeccable.