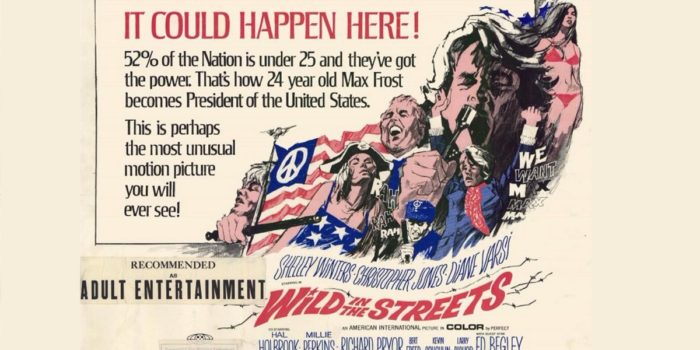 In this counterculture classic, US demographics are shifting and more than half of the population are under twenty-five. Max Flatow, a malcontent teen played by Christopher Jones, throws himself into a sea of runaways to emerge as mega rock star, Max Frost. Because of his popularity, Frost is courted by politician, Johnny Fergus, played by Hal Holbrook, in hopes of an endorsement.

Frost helps the politician, but soon recognizes his own political potential. By virtue of his popularity, his place on the world stage and some manipulation of the system, Frost manages to become US president. With the support of his legions of young followers, Frost redistributes wealth and turns the US into a hedonistic Gomorrah where thirty is the mandatory retirement age, and those over thirty-five are put in reeducation camps and force fed LSD.

Though this cautionary tale is 50-years-old, it’s approach is still fresh. Most dystopian stories rely on catastrophe, a nuclear war, a pandemic, or zombie infestation as the catalyst for change; in this story society is reshaped by shifting demographics and the needs and wants of youth replace the needs and wants of everybody else. In 1968 this was the establishment’s (the counterculture’s name for established US society) darkest nightmare.

In true hippie fashion, this film pushes outlandishness to ridiculous heights. For example, Max and his ever present entourage dose Washington, DC’s water supply with LSD as a way to manipulate a senate vote. On top of that, at thirty-five years of age people are rounded up by the age-police and put into reeducation camps… and force fed LSD for the rest of their days.

I suspect Timothy Leary consulted on the script.

What I like most is the ambiguity that’s left at the end of the film – look at it one way it’s a cautionary tale warning us of a dystopian culture on the rise, look at it another and it’s a tale promising a utopia, where every hedonistic impulse comes to fruition.

There are those reeducation camps and the LSD thing, but is that really so bad? If I were to ask my15-year-old, pot-smoking self, I would definitely say that an endless hallucinogenic wave would be a groovy way to surf out the last two thirds of a life, but now…yikes. Yikes indeed.

It should be noted that this film uses unorthodox techniques. A campy narrator, speaking like an old time news broadcaster, is used for general info dumps. Hollywood used similar narration throughout the 1940s and 1950s. The technique was overused, and by 1968 it was hokey and used in this film to poke fun at tradition.

Music plays an important role in this film. In addition to a soundtrack, they use Max’s performances to punctuate the story’s key points.

Noteworthy facts: Wild In The Streets was nominated for an Academy Award for editing. Its soundtrack had a top 20 hit, ‘The Shape of Things to Come’, and comedian Richard Prior played the role of Stanley X, drummer for Max’s band.

This movie is fun, ludicrous, and outrageous. It’s a little slow by today’s standards, but worth a viewing. Dave Schultz has a BA in Creative Writing from Southern Illinois University.  In 2013,  he was nominated for the Pushcart Prize for his short story, “Colt 45” which appeared in 5th Wednesday.  More recently he’s had work in Rivulets, Common line Journal, Aphelion, and has written for The Blue Billies, a live performance literary group. Dave writes in a multitude of genres, and in mainstream literary fiction. For the last 10 years he has worked as an artisan for Lakland Bass Guitar.

In February 2018 his story “Femme Fatale” will be in  Smoky Blue Literary and Arts Magazine, which you can read by clicking here.