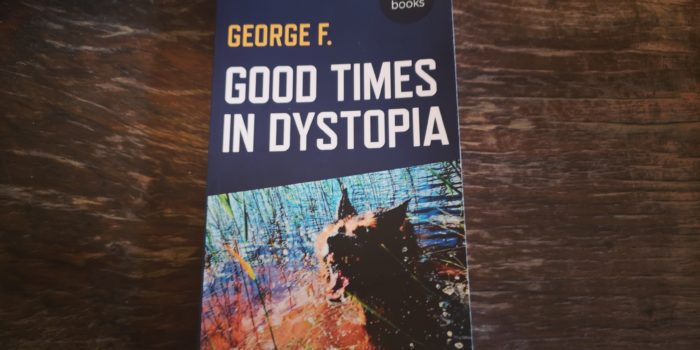 I’ve been intrigued by punk culture and the concept of anarchy since the age of 16. That was when I first started getting into music from the 70s and enrolled on a Government and Politics A-level course in college. I thought that, despite my timid nature, inherent respect for authority and deep-seeded fear of conflict, this was a scene I could really feel at home in.

But, despite my tattoos and music taste, I’ve finally accepted at the age of 30 that I’m as far removed from that world as anyone possibly could be. Mostly because I’m as scared of it as I am allured by it. I may have watched Made in Britain countless times, love the Stooges and have a safety pin tattooed on my shin, but I’m nothing but a wannabe. A faker. A tourist.

So, when George F invited me to review Good Times in Dystopia, an almost fictional depiction of his non-fictional journey through squats, riots and protests in London Berlin, and Paris, it was like embarking on the ultimate punk holiday. From the first page I was immediately thrown into a culture so disparate from the mainstream that most people don’t even know it exists. An invisible world right under our noses, so to speak.

In his book, George describes a myriad of colourful characters in chapter-long anecdotes (and yes, ‘colourful character’ is definitely the kind of term a fearful mother would give them, further proving how much of a tourist I am). While many of the people these anecdotes centre on are broken, lost and saturated in alcohol and drugs, they are also talented artists, political activists, animal lovers and charismatic charmers who may only be considered ‘colourful’ due to the fact that they’re living on the very edge of society.

As George describes his bizarre, perilous and often comical exploits around Europe, which include the COP21 climate protest, breaking into a theme park (twice) and a graphic (and practical) masturbation workshop, I was completely pulled into his world of tender debauchery. I often felt myself comparing his style and some of the content to Fear and Loathing and Trainspotting, yet George’s world has much more heart, gentleness and sincerity. It shares the rich imagery and shock factor of these aforementioned books, but there’s also an element of brutal realism and warmth that made Good Times in Dystopia much more captivating. It glamorised drugs as well, of course, but never in a fantastical way.

While I enjoyed every page of this anarchical escapism, I also felt very conflicted. On the one hand I was immersed in a thriving squatting community of outcasts who seemed to live a purer, more meaningful life, somehow simultaneously primal and futuristic, yet on the other hand I worried over a group of lazy idealists as they chased a naïve, contradictory and unsustainable lifestyle. I felt a romantic pull with people who clumsily lived on top of one another, doing what they wanted, talking and singing and making and doing, marching the streets without fearing consequence or authority in order to fight for what they believed in, but at the same time their anarchic dream seemed futile. They thrived on conflict and stole the benefits of the consumerist lifestyle they were so adamantly against. They never appreciated differing lifestyles and how their actions may damage or hurt other people. But then again, does the average person care about the homeless? The disenfranchised? The atypical? Does the average Joe consider how their lifestyle could damage those who are unable to live similarly?

Every negative point I come up with for living the nomadic lifestyle is always partnered with a positive point. It’s hard to be the kind of person who lives on the fringes of society, but it’s also hard to live within society. If I had to make a pro and con list, especially in today’s political climate, I’d say we’re all losers. It’s just some of us know it and have subsequently chosen to live differently.

I think what hit the hardest with Good Times in Dystopia was the many examples it included of human shittiness, to want of a better phrase. I felt bombarded with the evidence of how foul society is, and it felt overwhelming at times, particularly when George recounted the Body Without Soul documentary about young teenage boy prostitutes living in Prague, the murder of Stephen Simpson and the vilified life of activist Barry Horne. Giving up on society seems almost inevitable after all that.

So, if you want to be taken on a twisted, captivating tale into the underground, to a place where people do and say and think what they want, who suffer and enjoy themselves enormously, who fight back against the man while trying to steal his comforts, all in a story written so, so eloquently – check out Good Time in Dystopia. I definitely enjoyed my time as a tourist.

You can get a copy of Good Times in Dystopia over at John Hunt Publishing.