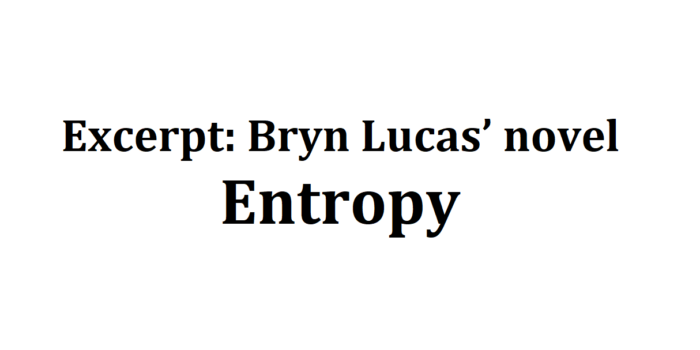 Dystopic was very excited to receive an excerpt of Entropy, a dystopian novel set in London in the year 2048. It centres around Dylan Sharkey, a civil service desk jockey who is ‘sucked into a revolutionary plot to bring justice to the dispossessed.’ Rife with moral quandaries, this novel is a hard-hitting political thriller that predicts a very dark and worrying future.

You can buy Entropy on Amazon for Kindle and paperback, but for now please enjoy this little snippet:

It all started with Seda.
Seda the tender. Seda the merciful. Seda who had awakened the long slumbering embers of reb-hood that smouldered within him.
A chance virtual encounter with the descendent of an Armenian king inspired his first faltering steps toward insurrection and changed his life forever.
It was some damn fool politician who had created the ‘Ring of Steel’. War and famine had driven millions of dirt poor peasants from their homes. The displaced masses all wanted a place of sanctuary. A couple of random murders by recent immigrants whipped up additional hysteria, eagerly abetted by the news brokers, and the government duly closed the borders, erecting a ten foot high metal wall topped with razor wire around the coastline. “From Penzance to Inverness and back again,” the minister had proclaimed. Sentry watchtowers were posted every mile. The barbarians must be turned away.
Dylan had thought it a ridiculous waste when half the country was collapsing under the weight of idleness but he wasn’t the type to go out on the streets about it. Until he found Seda.
They’d met on an underweb forum for the internationally curious. It started out as casual flirting but soon got serious. She buttonholed him about life in Armenia since the TransRussian restoration. The violence. The disappearances. The rapes. After several weeks of horror stories he ventured there may be a way out.
One of his responsibilities at the Ministry was maintaining the rota for watchtower postings. There was no way the government could afford eleven thousand diligent sentries, staring out to sea, watching for the oncoming hordes. The towers were mainly a sham for the public’s benefit. One thousand “Realm Protection Operatives” were continuously shuffled round the coastline to give the illusion of impregnability.
He was privy to the wall’s maintenance log. He knew where damage had been reported and he knew when it was scheduled to be repaired. It was with this information he got Seda into the country.
He was a slapdash fool back then. He’d picked her up from Bognor Regis – the nearest town to the barricade breach – and taken her back to his flat in London. She was dumpier and spottier than her pictures but the mutual adrenaline of their illicit escapade overwhelmed them. They became lovers immediately. Finally, after years of casual, throwaway relationships with shallow, pointless wenches, he had someone who he could contemplate falling in love with. She intrigued and inspired him. Tales of the underground resistance in Yerevan titillated him each evening. Every bombed out Russian truck, every slit Slavic throat excited him further.
Then he lost her.
She slipped out one evening. She never came back. He spent weeks trawling the streets of Hackney with her picture but no-one would ever admit to seeing anything. He did hear one rumour of an olive skinned girl being picked up by the Alien Repatriation Service on the high road but he was never able to verify that. He tried to contact her through the various underweb haunts they had shared but she never resurfaced. He could only hope that she had been deported. The repatriation service didn’t bother sending them home nowadays. They usually just shipped them to a random overseas protectorate and left them to get on with it. The alternatives to deportation didn’t bear thinking about.
The paranoia lasted for months after her disappearance. Every hand on the shoulder became a stranglehold to drag him away. Every knock on the door represented the coming of the Treason Wardens.
Eventually the pain and dread began to ease. He returned to his life of drunken cavorting and cavalier flings and resolved to forget about his Armenian princess.
He never did forget. Two years later he resolved to help others in need as atonement for letting her down so badly. He started filtering information to groups of would-be immigrants he befriended online. This time he never made the mistake of meeting them. Once they had the information they were on their own. He never knew which ones made it, which ones were picked up by the authorities or which ones perished in the treacherous boats they used to travel from their own personal hellhole to this green and pleasant land. His conscience was clear. It was their choice. He could merely try and make sure that he was helping the most desperate and worthy groups in Seda’s memory. His little blow against those that had taken her from him. Bryn Lucas is an author with an interest in creating challenging works through envisioning the ultimate outcomes of contemporary accepted wisdoms. His first novel demonstrates this in the London of the near future, in which a civil servant is awakened to the injustices and hypocrisies that the UK has sleepwalked into. His untitled second novel will be set in Asia, shedding light on Sino-Japanese tensions through the eyes of a young English teacher in Tokyo. He is a veteran of the UK media and tech scene and currently lives in Manchester with his wife and two kids.