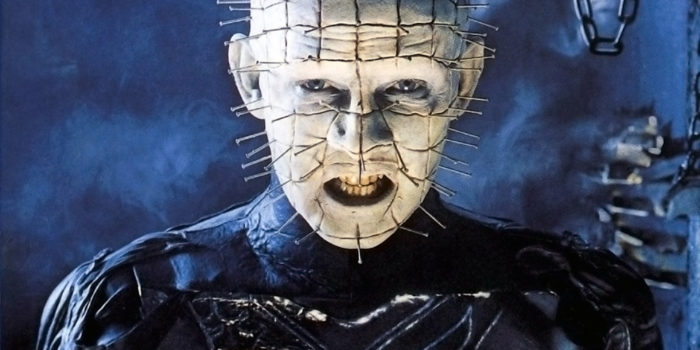 Kicking off #HalloweenMonth 2017 is the 80s classic, Hellraiser.

The film opens in Morocco as a merchant sells a mysterious puzzle box to a character named Frank. As Frank solves the puzzle in his late mother’s vacant house, he is torn apart by metal chains that fly out of the box and hook and tear at his flesh.

Some time later Frank’s brother, Larry, moves into the house with his second wife, Julia. Julia and Frank had an affair some years before, but Larry hopes the move to his mother’s old house will be the fresh start they need to improve their relationship. While moving, Larry cuts himself on a nail and unknowingly bleeds over the spot Frank was decimated by the box. This small amount of blood resurrects Frank.

Julia stumbles across Frank later on. He is skinless and weak and says he can be restored back to his former self if he drinks enough fresh human blood. Still desperately in love with him, Julia agrees to find him some unsuspecting victims and bring them back to the house for him to feast on…

What ensues is an incredibly entertaining horror filled with hellish monsters, terrifying ‘Cenobites’ and some of the most gruesome special effects I have ever seen.

I was surprised by how well Hellraiser fared thirty years after its initial release. It was seriously cheesy, with some rather embarrassing acting, unnatural dialogue and terrible 80s fashion, but the effects completely stole the show – creepy and gross in a way that is very typical of horror movies of that era.

Frank’s resurrection scene was particularly impressive. It was disturbing yet fascinating to watch his bloody brain slowly form, grow and throb, his rib cage crack back together again and his sinewy muscles writhe and pulsate with renewed life. Seeing as it was done on a budget of just $1 million, modern day horrors have been put to shame in my book.

I truly believe that CGI will never take the place of good makeup, special effects, puppetry and clever camera work. I initially thought Hellraiser’s naffness would detract from the horror, but if anything it accentuated it. Definitely deserved of its classic status.