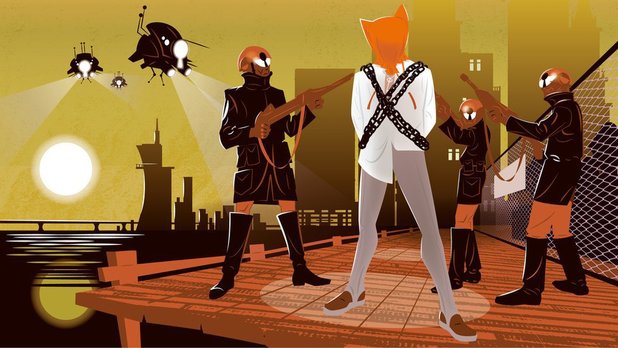 The tired cliche ‘a picture paints a thousand words’ has been filling my head recently after discovering Grant Morrison and Rian Hughes’ phenomenal comic ‘The Key’ made for the BBC Freedom 2014 project. Even without dialogue the illustrations demonstrate a rich story structure that is striking, thought-provoking and emotive. It is stunningly economic with what it reveals to the audience, much like a skillfully written short story by Bradbury or Forster.

There are a great number of comic books, graphic novels and pieces of artwork that can be found on the internet saturated in the dystopian theme, and in a way they are more effectual than the written word due the immediacy of their message. Dystopian literature is often quite dense with layers upon layers of politics, philosophy and morality…but a picture? It’s a single impact. It’s a stamp of a boot, a scream, an explosion, and it’s impact is universally understood.The horror and fear that comes with destruction is organic and unquestionable in an image.

They say the most shocking stories tend to originate from reality, and the best dystopian images I have ever seen are photographs of the Chernobyl disaster. You can’t recreate the utterly compelling, eerie and oddly beautiful style of those pictures without impeding on the underlying message. They speak of the trauma of the event itself, the uncertainty for the future and of the empty, stagnant present. So much is said in a single snapshot, perhaps a lot more than can ever be said in a few thousand words.

I hope the below photographs are circulated for many years to come to remind humanity of the mistakes it has made and might make again….something that maybe Nineteen Eighty-Four and other similar novels has failed in doing so far.