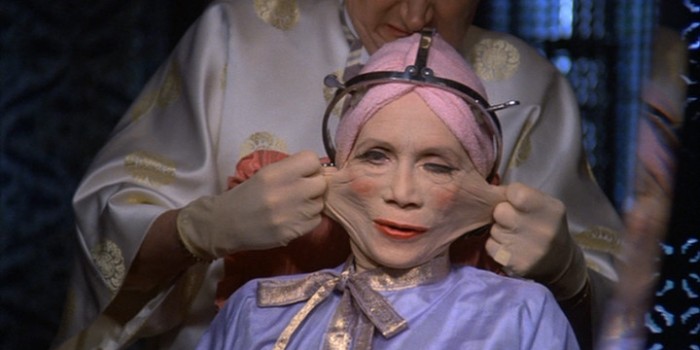 Brazil is one of those films that you will never be entirely sure about. It has huge cult acclaim because of a varied array of top notch actors, a witty and edgy dialogue that doesn’t always make complete sense and a vast number of weird and wonderful ideas crammed into two hours. But does it work as a whole?

I think the answer is a no, but that doesn’t make it a bad film at all. Brazil is extremely ambitious and complex, and its political relevance and largely harrowing themes are disguised with a morbid ridiculousness that only a director working in the eighties could have produced.

The film centres around Sam Lowry, an unambitious government official searching for the blonde woman that haunts his dreams and fantasies. Alongside Sam’s quest to find his soul mate, he notes what it is like to be an outcast in a community of sheep, the absurdity of his government, the shallow society that his mother has become absorbed in and the media’s hyped projection of the idea of ‘terrorists’. Even though the film is almost thirty years old now, the nonsensical aspects of humanity that it focuses on are still relevant to today’s audience. The jokes are still funny, the stern moral messages are still heart-stoppingly horrific and the characters are still recognisable as our bosses, friends of friends and those unlikable politicians we hear so much about.

Although segments of the film are extremely effective, the love story between Sam and his dream girl are a little bit two dimensional and boring. I understand that in a dystopic film there has to be elements of human interaction in order to keep it from being too stiff and soulless, but I did think these sections let the rest of the film down. The characters are all hilarious and completely off the wall, so it felt a little bit wrong to have an (almost) serious relationship in the midst of it all.

The great thing about having humour in a film such as this one is that the serious underlying message about having a country run by superficial, artificial and foolish people really stands out in a compelling and disturbing way. The ending is incredibly moving and tragic and, although the love story in the middle began to distract me from the movie’s overall brilliance, the ending brought me back to the realisation that Brazil is one of a kind.

You can’t prepare yourself for a movie like this because you won’t have seen anything like it before. It is both hilariously insane and alarmingly sane, and its observations are so close to the bone that it’s extremely uncomfortable viewing at times. A definite recommendation…except for those who are frightened of scary baby masks. Those things were worse than any modern horror film that I’ve ever seen (and I’ve seen Human Centipede 2).

One thought on “Brazil Review”