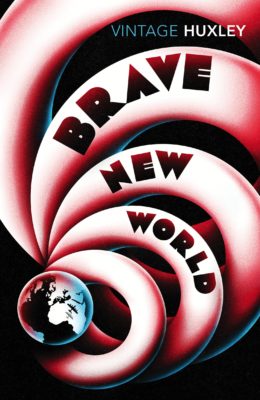 For my 2018 reading challenge, I have been rereading four classic dystopian novels that had a huge impact on the way I view literature. Of all the books in my challenge, the one I found I couldn’t remember so clearly was Brave New World by Aldous Huxley. Now with hindsight, I believe that was because the ideas and questions posed by the novel are far more iconic than its story – not to say the plot is bad in any way, but this is definitely an ideas novel that showcases Huxley’s incredible mind over his study of character.

Huxley was seemingly both fascinated and frightened by the idea of nurture superseding nature, as the core of Brave New World follows the consequences of babies being conceived, reared and conditioned in laboratories. In the year 2540 (or 632AF, After Ford) in the World State, all human beings are carefully created in test tubes so that they are perfectly suited to perform particular duties within society. These babies are then brought up in particular ways with particular conditioning so that their manufactured qualities flourish in adult life. They are all given a manmade destiny, with many of them even looking the same.

The main character, Bernard Marx (two guesses who he was named after), is a bit of an anomaly; he was created and conditioned in the way that he should have been, but for some reason he’s different to everyone else in his caste. He’s a bit ‘off’. There are rumours that he had too much alcohol in his solution when he was being created, but no one knows for sure why he’s such an outcast. He even refuses to take soma, a drug that all citizens take to remain happy and placid – and easier to control, of course.

Sexuality in Brave New World focuses on unemotional, polyamorous encounters. Citizens are encouraged to have sex with as many people as they desire (who are in their caste and are on birth control) and staying with the same person for too long is seen as socially abnormal. However, Bernard isn’t really into that – he feels uneasy, mainly because of his strong feelings towards Lenina, a woman who finds him peculiar yet interesting. Eventually she agrees to go on holiday with him outside of the World State to New Mexico. He wants to go to discover and study natives in their natural habitat, people who procreate and age naturally, whereas she just wants to enjoy herself on vacation.

While in New Mexico they come across a woman originally from the World State who was cast out when she became pregnant. They meet her son, a man who is neither a native nor a civilised member of the World State, trapped between two identities, and Bernard decides to bring them both back with him to the World State. What follows is a compelling, and often humorous, look at the conflict between societal norms and human nature. Huxley questions culture, the definition of vulgarity, sexual freedom and, perhaps most interesting of all, the misconception of human control.

I got a lot more out of this novel when reading it for a second time. What makes humans unique is their individual uniqueness – the ability to question, change, adapt and improve separately in order to better the race as a whole, to teach what has been learnt by individual expeditions. To be stagnant is to regress, and Huxley definitely saw this as a potential downfall for human beings. We must always be in some level of struggle, we as a species should and could never be happy and content. That isn’t the point of living.

But in the same breath, invention does not necessarily lead to improvement. I have always felt that with new technologies and medical interventions we are unable to control the natural balance of things. While we are curing illnesses and keeping human beings alive for longer, we should also be euthanising those who can no longer die naturally but have poor quality of life. Huxley perfectly illustrates the idea that, although we think we do, humans do not always know best. By trying to do good we often do a whole load of bad.

What I loved most about Brave New World was that humans aren’t deemed evil, pointless or irreparable in it – just misguided. We can just as easily save the world as we can destroy it. We’re just too excited by our own inventiveness to see that.

This is a must-read novel, whether you’re a fan of sci-fi or not. I know that phrase is used far too much in the world of book critics, but I really mean it with this one. It’s truly life-changing. Long life the outcasts.