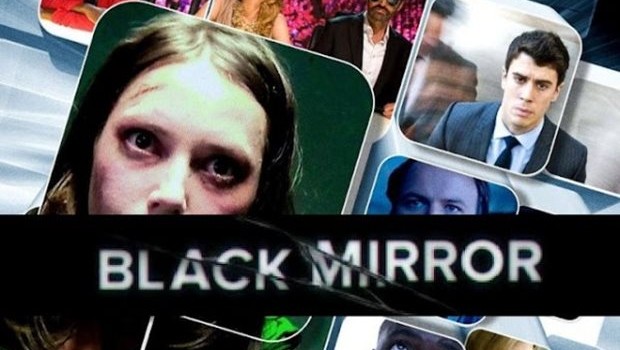 One of the greatest voices of British modern satire, Charlie Brooker, created the drama series Black Mirror back in 2011 to much critical acclaim. The first episode, entitled ‘The National Anthem’, involves the kidnapping of a princess and the subsequent demand by the kidnappers for the prime minister to have sexual relations with a pig live on television.

A great way to kick off a TV show, I’m sure you’ll agree (although Brooker was apparently unaware of the Hameron/Piggate scandal at the time, so it is just a hilarious coincidence. Shame).

Remarkably, ‘The National Anthem’, although nauseatingly tense and funny, is actually the weakest episode of the series, which is otherwise very dystopian in theme. It does however set the tone for a deeply dark yet comical show that has a no holds barred approach to politics, human nature and the impact of technology.

The second episode, ‘Fifteen Million Merits’, reveals a dystopian future in which all members of society have to continually cycle in order to provide power for the country. Money has been replaced by merits, which are earned the more one cycles and the less food or facilities one uses. To keep the workers from becoming bored, revolting or simply slipping into psychological despair, everyone is designated their own personal avatar that they can customise and use in games while they cycle.

The overall look of this episode is seamless, combining the technology of today with that of an imagined future to reveal an intensely claustrophobic and realistic backdrop.

The primary element of the episode is Hot Shot, a show that clearly alludes to the X Factor. The phoney presenters and vicious competitiveness portrayed in the talent show is uncomfortably close to home, successfully revealing how utterly pointless and even damaging that sort of entertainment can be on society. Definitely the strongest episode of the series and has a gut-punch of an ending.

‘The Entire History Of You’, the third and final episode of the series, is a frightening glimpse into our increasingly technology dependent future. The majority of the population have had a chip implanted in their head called the ‘grain’ that records every minute of every day through the eyes of the wearer.  The footage can then be rewatched by the wearer or projected onto screens. The footage is dubbed a ‘redo’.

Of course, everyone using a grain becomes obsessed with every little detail of their daily activity, rewinding repeatedly to try to decipher their past in greater detail. Ridiculous, uninteresting moments of the day are even showed to friends and family for their opinion on events they should not have otherwise seen.

Again, this is an obvious indication toward our current relationship with social media. Black Mirror has a horrific ability to be able to make modern life seem both ridiculous and pointless, which I suppose is what all good satires do.

Overall the series is one of the most relevant and fascinating pieces of dystopian television to be aired on British television. It is flawed in places and is very ‘Channel 4’ (I’m sure some of you will know what I mean by this) but it is experimental and confident, attributes that do not often appear on our screens