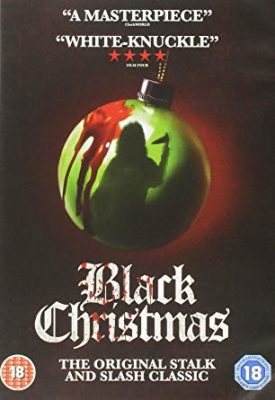 I love Christmas horror movies. Adding a dash of pure evil to the most wonderful time of the year usually results in some sort of delightfully cheesy spectacle, so when I discovered the classic 70s movie Black Christmas on Amazon Prime I was expecting a naff, cringey mess.

Oh, how wrong I was…

Don’t get me wrong, this movie definitely has its tacky moments (god bless the 70s), but it also turned out to be one of the most frightening horror movies I have ever seen.

Black Christmas begins with a man stalking a house at night before breaking in and hiding in the attic. At first everything is shot from his perspective, as if you’re seeing the world through his eyes. Although this technique has been done to death since, it gave the opening credits a real creepy edge. It was at this point that I realised Black Christmas wasn’t the sort of film I was going to lovingly mock afterwards.

The house that the man has broken into is a sorority house, where all but a handful of students (and their hilarious house mother) have left for the holidays. They had held a small party to celebrate the end of term, and as the few remaining girls say goodbye to their boyfriends, finish off their drinks and get ready to call it a night, the phone rings.

On the line is a gruff-voiced man, breathing heavily and growling. After a few seconds he starts shrieking sexual obscenities while the girls gather round to listen. They try to laugh it off – they’ve been getting these calls for a long time – but the voice becomes more and more disturbing. They can’t hide the fear on their faces. Finally, the caller grows silent, but just before he hangs up he whispers, “I’m going to kill you.”

I’m sure you can all guess what happens next. The man who broke into the house was the one who had been making the threatening phone calls, and he goes on a murdering rampage throughout the house, picking the girls off one by one. Although the story seems familiar now, it was actually the first of its kind. Black Christmas, or Silent Night, Evil Night as it was dubbed in the states, was one of the first slasher movies ever made. John Carpenter’s Halloween came out four years later and was clearly some sort of love letter to its gruesome predecessor.

These sorts of plots have become a cliché now, but Black Christmas is far removed from the dull horrors of the 90s with their scream queens and masked villains stabbing unsuspecting babysitters. I didn’t feel like every murder in the movie was an inevitability, nor could I have guessed the order in which the girls were killed. The characters were realistic and interesting, and I felt upset and horrified by each and every death.

It seems strange to think that I have watched many horror films and haven’t cared whether an innocent character lived or died. Even worse, I have often felt that some characters deserved to be murdered sooner than they have been. Black Christmas is much richer, more complex and compelling than the majority of slasher movies that have been made since, and I was not at all prepared for it. It didn’t glorify or sexualise the killings in any way, which greatly added to the suspense and sense of realism.

So, if you fancy watching a fun Christmas spookfest this December, give Black Christmas a miss. Only watch this movie if you want to wait for Santa with all the lights on, having triple-checked that every door and window in your home is securely locked before going to bed.