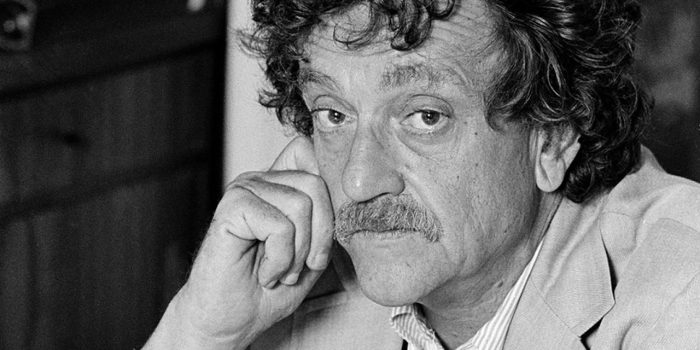 Name: Kurt Vonnegut Junior
Nationality: American
Born/Died: 1922-2007
Famous for:  Slaughter-house Five (1969), Cat’s Cradle (1963), Breakfast of Champions (1973),The Sirens of Titan (1959)
What makes him a revolutionary: Throughout the eighty-four years of his life Vonnegut experienced unimaginable highs and lows that greatly influenced the creation of his iconic fiction. In his childhood he lived the American dream with his wealthy mother and father before the Great Depression ruined them financially, resulting in his mother’s alcoholism and subsequent suicide. At twenty he signed up to fight in the Second World War but was quickly captured in Dresden and sent to a POW camp, witnessing the infamous bombing that killed thousands of civilians. He went on to marry his childhood sweetheart and had three children, later adopting his sister’s sons after she and her husband died days apart from another – he from an accident and she from cancer.
What developed from such experiences was the painful humour and bleak satire of Slaughterhouse-Five and Cat’s Cradle, such unique works that are unlike anything written before or since. He addressed oppression, the destructiveness of war, mental health and religion in such a persuasive way that it can only stem from someone who knows, someone who has seen the horrors of conflict that most cannot appreciate or recognise. What makes Vonnegut such an important figure of dystopian literature is that he, like Orwell and Burgess and Dick, lived within a point of history that could arguably be classified as a real-life dystopia. His fiction was written as a result of fact, and nothing is more important for our future than cautionary tales from our past.