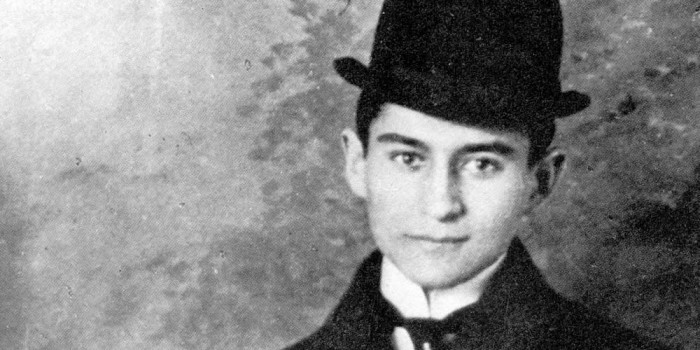 Kafka was born into a middle-class Jewish family in Prague. He struggled from a very young age with his overbearing, authoritarian father, with his Jewishness, with his fractured country and with an all-consuming loneliness due to his parents’ long working hours. However, he was fortunate enough to have access to a good education and excelled in his university studies to become a lawyer – an occupation he did not particularly care for but one that pleased his father.

The biggest bane of Kafka’s life was his job. He adored writing and, from the great volume of work he produced over his lifetime, clearly desired to be an author above all else. The problem was that many of his hours were stolen from him by his employment (a struggle we can all sympathise with). The feeling of being torn between maintaining his responsibilities and his ‘calling’ is evident in his incredibly tense short stories.

Kafka was also tortured by his want for sex coupled with a crippling self-loathing. He obsessed, analysed and needed women, yet he was constantly worried that they would find him repulsive. He had many problematic relationships as a result.

Naturally, his death was horrific. Kafka contracted tuberculosis but actually died from starvation as his throat had become so sore and painful he was unable to swallow. He requested for his literature to be burnt upon his demise but they were published instead. His huge literary successes came about not long after his death, proving that the man was simply not supposed to be happy in this world.

But of course, out of so many struggles and psychological issues came some of the most influential pieces of literature ever created. Metamorphosis, the novella of a man transforming into a large insect, channels Kafka’s struggles with identity and self-disgust so iconically that the story stands strong even today. His other works are thematically similar but all uniquely torturous, helping the everyman to identify with the universal burden of simply being a human.

Personally I find Kafka a bit of a slog to read. His masculinity was certainly at the forefront of his problems and I feel that, although the female mind can appreciate such woes, women can never truly understand the weight of these sorts of miseries.The male role in his society came with unfathomable expectations, most of which he felt he could not fulfil.

Kafka’s prose is also thick, heavy and burdensome, but through the dark layers there is some beautiful descriptions that will stick with the reader forever. He was undeniably in the ‘genius’ category, but whether it was his expressions of pain or an inherent gift that made him so, he was a revolutionary writer.