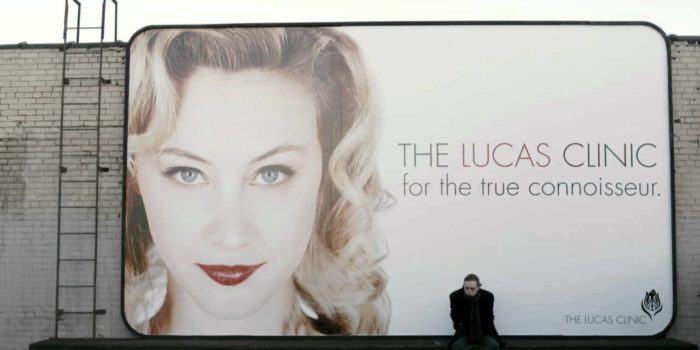 This dystopian sci fi/horror was purchased in Poundland so I didn’t have particularly high hopes, yet it was a surprisingly unique and impressively shot film with a refreshing take on celebrity culture. It also managed to be a complete creepfest without the use of gratuitous violence, although it was incredibly gory so if you’re frightened of needles you might want to give this one a miss…

The protagonist Syd March works for the Lucas Clinic, a private medical centre that harvests the viruses of celebrities. Members of the public pay to be infected with these illnesses in order to feel closer to their favourite stars. Syd becomes involves in distributing the viruses on the black market by infecting himself at work and extracting the viruses to sell on when he gets home. What ensues is a trippy, gross and crazy story that reveals the insanity of celebrity culture and how far people will go to for their idols.

The premise of Antiviral initially seemed far too implausible but on reflection it may only be a matter of time before this sort of venture is set up. Crononberg came up with the idea after Sarah Michelle Geller apologised for having a cold on Jimmy Kimmel’s chat show, and when she sneezed the audience began to cheer.

A rather weird reaction to snot.

Although Antiviral was interesting and really got me thinking about the crazy way we treat actors and musicians in western society, the pacing was off and incredibly slow at times. The effects and overall tone of the film was fantastic but I often felt disengaged, mostly due to the two-dimensional characters who only served to progress the (rather flat) plot. Caleb Landry Jones looked perfect for the part but lacked the charisma to pull off such a bizarre character, and because he had so much screen time he made watching the movie feel a bit like hard work.

I’d definitely recommend seeing Antiviral for something a little different from your average horror movie, but it’s frustrating to think it could have been fantastic if only it had had a few tweaks here and there. Crononberg definitely went all out on the aesthetic side of things but that couldn’t completely make up for a weak storyline and relatively poor characterisation.