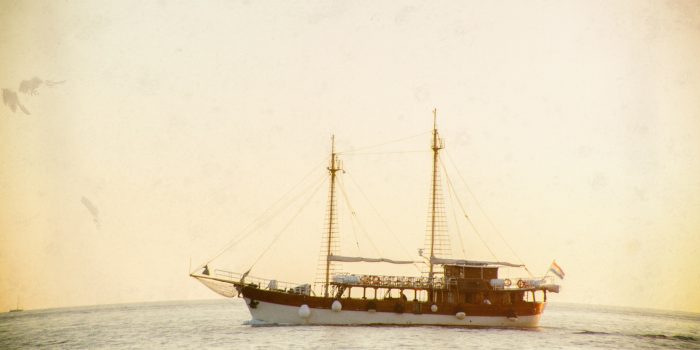 Carrie Vaughn’s dystopian short story Amaryllis is set in a society that is strictly controlled by quotas. Both the population and everything produced for it are kept to a minimum to avoid the issues of overpopulation, disease and starvation that occurred in the past.

Marie, the captain of a fishing ship named the Amaryllis, was born outside of the birth quota and is therefore seen as an outsider, perhaps even a traitor to the other citizens. For choosing to disregard the laws and becoming pregnant, Marie’s mother was sterilised and her entire ‘household’ is broken up and scattered across the country in punishment. Marie’s mother’s actions have forced Marie to carry a guilt with her simply for existing.

The story primarily shows life on the ship and the hardships the crew have to endure to keep themselves fed and healthy while also adhering to the strict fishing rules put upon them. Nina, a young woman Marie took in at thirteen, also demonstrates a deep and painful desire to have children despite knowing that she may never be allowed to have any.

Amaryllis is a very gentle look at an incredibly real and devastating issue. Vaughn describes how restricted and often unfair life feels when forced to follow the country’s quotas, but she never really touches upon the idea that these rules are set in place for the good of the people. Working on the ship is shown in a positive and pleasant light despite the fact that at one point the crew find what they believe to be a tunafish but they can’t be sure for the species has all but died out and no one has ever seen one in real life before.

In my eyes this is not a dystopian story but rather an inevitability. According to the United Nations, over 70% of the world’s fisheries are either ‘fully exploited’, ‘over exploited’ or significantly depleted’. Without transparency and control across the board on production we will undoubtedly see a devastating impact on the planet very soon. Vaughn fails to see this and in a strange way romanticises the idea.

Amaryllis is well written and thought-provoking but I felt the premise is darker, more poignant and far more interesting than the story itself is allowed to be. Vaughn really didn’t utilise the streams of information readily available to create a powerful, frightening plot and instead focussed on the relationships of the crew to put across a tale of hope and innocence, which thematically didn’t sit right with me at all.

I believe that any form of strict totalitarian control is a terrifying concept, even if there are good intentions behind it, but Amaryllis made me hope for such a future rather than fear it. Nothing good can come of restraining human advancement but at the same time not recognising its destructive nature will prove to be a fatal mistake.

You can read this short story online by clicking here.

One thought on “Amaryllis by Carrie Vaughn Short Story Review”