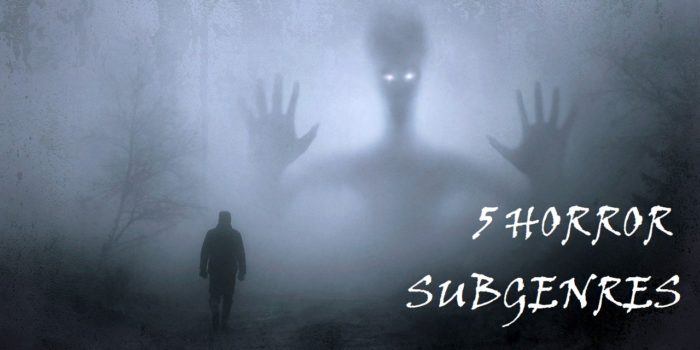 I’ve been a fan of horror since childhood. At the age of nine I owned dozens of Goosebumps books and sat glued to countless episodes of Who’s Afraid of the Dark (age-appropriate). I also managed to trick my parents into letting me watch the X Files and read William Peter Blatty’s The Exorcist (not so age-appropriate).

So I thought it might be interesting to share five completely different subgenres of horror movies with some of the best (and worst) examples of them. Of course, I’m not even scratching the surface here, so keep an eye out for possible future blog posts on horror subgenres such as killer clothing, Christmas horror and haunted babies…

Movies to watch: The Wicker Man, The Witch, Midsommar, A Field in England

For this genre, it’s all about small communities, runes, rituals and sacrifices. It tends to focus on the insanity of upholding tradition, even if everything logical, sensical and reasonable seems to oppose it. I find folk horror to be particularly disturbing, often giving the audience a creeping sense that something is ‘off’. It always starts idyllic – until someone gets trapped in a giant wicker basket and the villagers are holding flaming torches

Movies to watch: The Blob, The Thing, The Fly, The Faculty, Thinner, Alien franchise, eXistenZ, Eyes Without a Face, Super Mario Bros. (in my opinion a horror through and through)

Movies to avoid: The Human Centipede (any and all of them)

This subgenre affects me more than any other. To be dubbed a body horror, a movie can be about absolutely anything. It just has to include something gross happening to the human body. Think weird body transformations and body parts popping, ripping, squeezing or exploding. The 1980s made some of the most gruesome body horror movies in existence, and although many of them are ridiculous in both plot and characterisation, they will certainly haunt your dreams.

Movies to watch: The Others, What Lies Beneath, Sixth Sense, The Gift, The Orphanage, The Shining, Doctor Sleep, Session 9

Movies to avoid: The Conjuring franchise (I refuse to call it a ‘universe’), Ouija, Insidious (the whole series), Pet Sematary (strictly the 2019 version)

This is a very traditional subgenre of horror, and I wouldn’t be surprised if it was the most common. I’m always excited to watch movies about hauntings and possessions, especially those involving mediums or exorcists, but they’re often disappointing. I think this genre is seen as an easy scare and so many of them are lazily hashed together with unnecessary jump scares. That being said, there were many incredible ghost stories made in the early noughties that I will never stop rewatching.

This is a very difficult type of horror to get right. There has to be a really good reason for one of the characters to document everything going on, and if that isn’t believable then the whole movie is off.

The most famous found footage horror is of course The Blair Witch Project, and it spawned countless others that feature vomit-inducing camerawork and grainy cinematography, but I don’t think Blair Witch deserves the accolade it received, aside from starting a trend. If you want a near-perfect found footage horror, The Borderlands is perhaps my favourite horror movie of all time…or one of them at least.

Movies to avoid: The Meg

Natural horror is the least scary of all the horror subgenres featured in this list, but they’re usually campy and good fun. Also known as creature features, natural horror movies tend to have larger than usual, crazier than usual, more intelligent than usual or just plain evil animals that simply WON’T DIE.

Any great movies you think I’ve missed? Let me know in the comments.

2 thoughts on “5 horror movie subgenres (and some recommendations)”