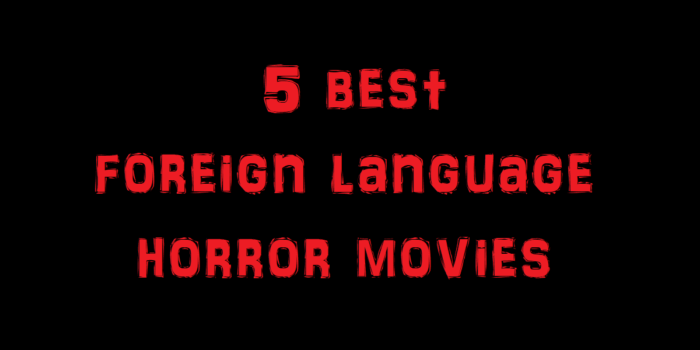 Although the genre is becoming more diverse, there are a hell of a lot of horror movies out there that continue to churn out the same old worn tropes, many of which are American-based. If you’re looking for something that’s as far removed from the ‘Conjuring ‘ as possible, both literally and thematically, here’s five of my personal favourite foreign language horror movies that are perfect for Halloween.

A Tale of Two Sisters is now quite well-known amongst horror fans. The plot follows Su-mi as she leaves a mental hospital, returning to her father, stepmother and sister in a house that is incredibly oppressive and full of memories – some good, but most of them bad. So much is unsaid, it’s one of those rare horror movies that you can get more out of the more you watch it. The characters are pained and trapped, and this claustrophobia really serves to heighten the tension and fear. The twist ending is also pretty devastating – I must have rewatched it three or four times and it never fails to deliver.

This black and white ‘Persian-language American vampire western’ is beautifully shot – I’d recommend seeing it for its aesthetics alone. Set in an Iranian town called ‘Bad City’, which runs on drugs, violence and prostitution, a beautiful female vampire feeds off of some of the scummy men she encounters when out and about. It’s a film of love, crime, identity and poverty, and it’s a fascinating hybrid homage to Sergio Leone and David Lynch. This may be more of an artsy movie than an outright horror, but it’s definitely creepy enough to be included in this list.

A dance troupe, having finished a successful rehearsal, decide to throw an after-party in their rehearsal space to celebrate. This party descends into an absolute psychotic mess of confusion, hysteria and violence. This movie has a bizarre, nightmarish quality with unrelenting long shots, absorbing dance numbers and an odd documentary- dialogue – the cast are all dancers, few had acting experience and a lot of it is improvised. It has a sort of staged realism that’s unlike anything I’ve ever seen before. If you decide to watch this, and I highly recommend that you do, shut off any part of your brain looking for a well-rounded, plot-driven film. Just allow yourself to be smacked around by this frenzied attack of the senses.

A serial killer murders a police detective’s pregnant girlfriend. The detective is determined to hunt down and avenge the love of his life. Doesn’t sound much like a horror, but this is hands-down one of the most stomach-churningly violent horror thrillers I have ever seen. With a plot that never slows down, characters that you love to hate and mind-blowing camerawork, this is the best Korean language film of all time (admittedly I’ve not watched them all, but if I ever do I’m sure this would still rank pretty high). It takes you on a rollercoaster of emotions, and by the end you’re as spent as the detective. Not for the faint-hearted.

According to legend, the Goddess of Prosperity gave birth to 160 million gods. Her firstborn, Hastar, was the greediest of them all. The other gods attacked him for this, but his mother saved him on the condition that he’d be forgotten about and never worshipped. Tumbbad is a treasure hunt for Hastar’s wealth (that you know is going to go terribly, terribly wrong), with a supernatural twist on the desperation of poverty and the true evil of greed. Hilarious as well as creepy, this is a real unique must-see. Especially as it was filmed twice – the first version, shot ten years earlier, was deemed not up to the filmmakers’ standards. They certainly succeeded the second time around.